Mazda said two years ago its legendary rotary engine would return, but not as a primary power plant.

Now it has all but verified that a tiny version of the engine will debut as part of an electrical generator system to extend the range of the all-electric MX-30 crossover vehicle it unveiled in January. 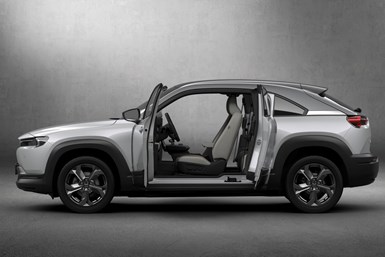 Car magazines have been abuzz about the idea since 2013, when Mazda unveiled a prototype electric Mazda 2 small hatchback. The car featured an on-board electrical generator powered by a tiny 330-cc rotary engine.

Two years ago Mazda confirmed it would introduce the extender system in 2020, but it didn’t identify which model would receive it. Now the company hints strongly that the technology will bow in the MX-30, an all-new electric crossover vehicle it unveiled in January, when the car goes on sale later this year in Japan, Europe and the U.S.

The rotary engine, also known as the Wankel, was conceived by inventor Felix Wankel in 1929. But he didn’t build a workable prototype until nearly 30 years later, as an employee of German carmaker NSU Moterenwerke.

Instead of pistons that move up and down, the Wankel uses a triangular rotor that moves eccentrically inside a chamber shaped like a fat “8.” Compared with a reciprocating engine, a high-revving Wankel is lighter, runs more smoothly, delivers a significantly greater power-to-weight ratio, requires no oil changes, has fewer parts and is cheaper to make.

The Wankel engine attracted considerable interest among at least a dozen major carmakers in the 1970s. All except Mazda eventually abandoned the engine, concerned over its ability to meet then-new exhaust emission and fuel efficiency demands.

The engine enjoyed modest success in Europe in the 1960s, powering the NSU Spider sports car in 1964 and then the Ro 80 sport sedan three years later.

But NSU’s troubles with the durability of seals required at the three tips of the rotor soured the market, even as other developers conquered that problem. Eventually, only Mazda persisted with the technology.

Mazda introduced its first Wankel-powered model, the Cosmo sports car, in 1967. Variations of the engine, including two-rotor and turbocharged versions, powered the company’s RX series sports cars between 1978 and 2012, when the RX-8 went out of production.

Since then, Mazda has teased enthusiasts with indications the rotary might return in an RX series sports car, but only if the model generated global sales of at least 100,000 units.

In 2018 the company said it aimed to electrify all its models by 2030. It confirmed at the time that it was developing an unspecified all-electric model that would be equipped with a range-extending generator powered by a small rotary engine.