McLaren Automotive is well known for its powerful, lightweight supercars. 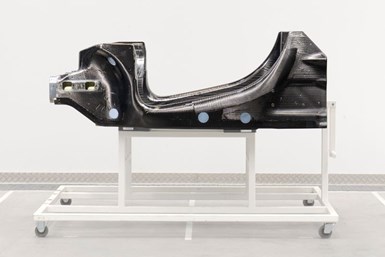 So it’s no surprise that its upcoming hybrid-electric models will follow suit.

The next-generation vehicles will ride on a carbon fiber tub that McLaren says is lighter and more flexible than the company’s current MonoCell. That architecture was introduced a decade ago for the 12C and has since carried everything from the legendary P1 hybrid supercar to the recent Speedtail.

By taking over chassis production, McLaren aims to save about £10 million ($13 million) per year and streamline the development process. McLaren says it will use industry-first processes and techniques to maintain structural integrity and enhance safety while optimizing weight.

This includes a new high-pressure resin transfer molding process that McLaren says has the clamping force equivalent to 100 double-decker buses. The system also includes precision cutting, aligning and machining steps, with special algorithms to determine the ideal shape and orientation of each sheet of carbon fiber.

The first new vehicle built on the architecture is due next year. The plug-in hybrid vehicle is expected to team a twin-turbo V-6 engine with an electric motor and have an all-electric range of 20 miles.

McLaren plans to offer hybrid variants of all its vehicles by 2023. A high-powered successor to the P1 with a twin-turbo V-8 also is said to be in the works.