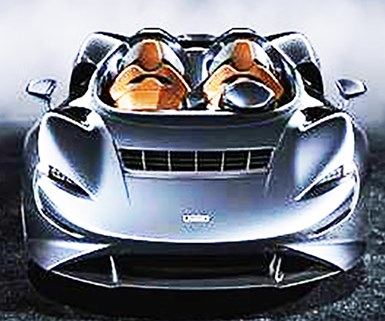 The open design, teamed with a carbon fiber construction, will make the Elva the lightest vehicle McLaren has ever produced. The car’s official weight will be announced later.

At highway speeds, the Elva uses what McLaren describes as the world’s first active air management system to protect occupants from wind. The system employs a large central inlet above the front splitter to channel air through the car’s nose and out of a clamshell vent on the hood. 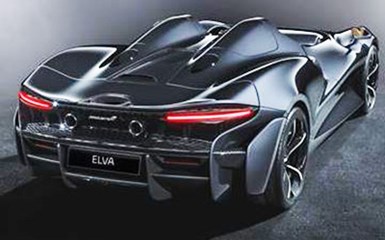 A carbon fiber deflector at the front of hood can raise nearly six inches to create a low-pressure zone at the vent. The vented air is directed through a 130° radius, using a network of transverse and longitudinally mounted carbon fiber vanes, and sent over and around the cockpit.

At lower speeds, air is diverted into two low-temperature radiators to improve cooling efficiency and boost engine output. McLaren says the radiators reduce the temperature of air going to the engine and help cool the oil in the car’s 7-speed transmission.

The car is propelled by 4.0-liter twin-turbocharged V-8 engine that is tuned to make 804 hp. McLaren says the powerplant will propel the Elva from zero to 100 kph (62 mph) in less than three seconds and to 200 kph (124 mph) in 6.7 seconds, which is even faster than the company’s track-focused Senna supercar.

The Elva’s aerodynamics are enhanced via an active rear spoiler and air intakes on the rear buttresses. Other goodies include electrohydraulic steering and a customized suspension, which McLaren says improves driving dynamics.

The car’s name comes from the U.K. company that provided the chassis for McLaren’s 1960s-era M1 line of sports cars. Production will be limited to 399 units, with deliveries due to start next year.