McLaren Automotive’s first series production hybrid-electric model is in the final stages of development and testing. This puts it on track to launch in the first half of 2021. 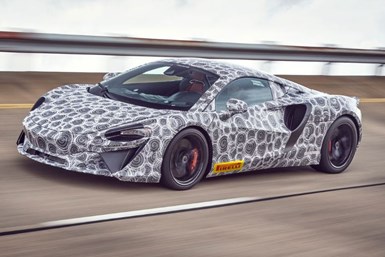 Effectively replacing the current Sports Series line, the yet-to-be-named hybrid car will sit between the recently launched GT and Super Series 720S in McLaren’s lineup. The limited-run 620R will be the last McLaren with the Sports Series designation.

McLaren released teaser images of the new model this week. The camouflaged supercar appears to blend many of the styling cues of its siblings, including the Sports Series’ front end treatment. 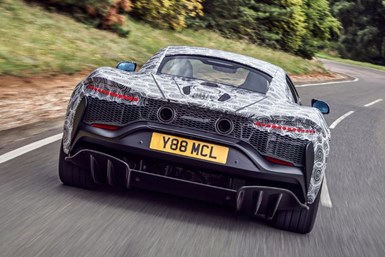 Dubbed a “high-performance hybrid,” the new coupe will team an all-new V-6 engine—expected to be boosted with a twin-turbocharged) and multiple electric motors. Media reports estimate the combination will generate more than 570 hp.

The hybrid setup is expected to be a plug-in configuration. McLaren says the system will be capable of powering the car on electric power for medium-range trips (estimated at about 20 miles).

The vehicle will be the first model built on the new McLaren Carbon Lightweight Architecture, which McLaren says is optimized for electrified powertrains.

The flexible carbon fiber tub replaces McLaren’s MonoCell, which debuted a decade ago for the 12C and has since carried everything from the legendary P1 hybrid supercar to the recent Speedtail.

McLaren plans to offer electrified variants of all its vehicles by 2023. The company’s previous hybrid offerings have been limited to low-volume hypercars such as the P1 and Speedtail.