Mercedes-Benz has developed an updated version of its touch-sensitive steering wheel system that offers more functionality.

The system allows drivers to control various infotainment features by touching or swiping different areas of the steering wheel. It also will monitor if a driver’s hands are gripping the wheel itself, which is required for autonomous driving operation.

Mercedes will launch the technology later this year in the 2021 E-Class sedan.

The new steering wheel builds on the technology introduced in the 2016 E-Class. That system features touch-sensitive raised nubs on the left and right spokes. 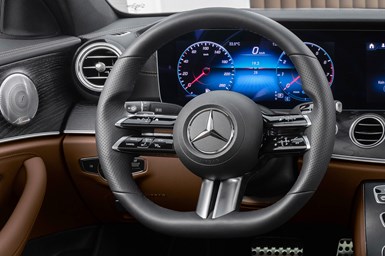 The updated steering wheel replaces the nubs and buttons with a capacitive flat surface. The system includes a four-way touch controller, a touch-slider to control audio volume and several single-purpose touch buttons, which are grouped together by function along the steering wheel spokes.

The system is designed to work under extreme temperatures (as great as 100°F), according to the carmaker.

The steering wheel's outer rim has a two-zone sensor mat to determine if a driver’s hands are holding the wheel to enable semi-autonomous vehicle functions.

On current Mercedes vehicles, hand position is extrapolated by steering wheel movement. That means drivers can circumvent the safeguard by moving the steering wheel with their fingertips or knees.

Buyers can choose among three new steering wheel designs: luxury, sport and “supersport.” The luxury version (pictured above) features a squared-off bottom and a prominent round housing for the main airbag.