Engineers have been working to eliminate turbo lag ever since Gottlieb Daimler patented the concept for turbochargers in 1885.

A lot of improvements have been made over the years. But, at least to some degree, the dreaded lag has persisted. 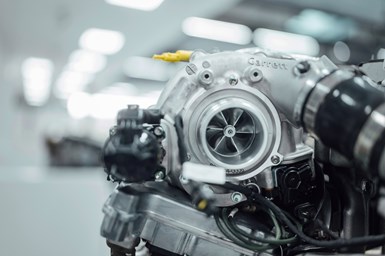 The latest technology fittingly comes from Daimler’s Mercedes-AMG performance unit. The company is working with turbocharger specialist Garrett Motion on an electric exhaust gas turbocharger that will power the next-generation of Mercedes-AMG cars.

The technology is adopted from Formula One race cars. Mercedes-AMG showcased the system on its 2018 Project One technology demonstrator car, which teamed a 1.6-liter V-6 engine with three electric motors and the eboost turbo to generate 1,000 hp.

Several carmakers already offer electrified turbochargers, starting with the Audi SQ 7 SUV in 2016. Those systems behave like an electric supercharger, with the electric unit providing low-end boost to minimize turbo lag until the main exhaust-driven turbocharger takes over.

Garrett’s integrated system adds new software algorithms and a small (4 cm) electric motor on the shaft between the turbine wheel and the compressor. This enables the turbo to quickly spool up and provide nearly instantaneous boost.

The turbocharger, electric motor and power electronics are connected to the engine's cooling circuit to create an optimum temperature environment at all times. The turbocharger achieves speeds as high as 170,000 rpm, which enables a very high rate of air flow.

In addition to combatting turbo lag, the new electric system enhances overall driving dynamics and agility, according to Mercedes-AMG.

The e-turbo also enables higher torque at low engine speeds. Boost pressure is maintained even when the driver takes his or her foot off the accelerator or applies the brakes, the automaker claims.

The system is said to minimize previous tradeoffs between small, fast-reacting turbochargers with relatively low peak performance and larger units with a high peak performance but suffer from turbo lag.

Switzerland-based Garrett, which was spun off from Honeywell in 2018, previously said it plans to launch an electric turbocharger in production vehicles in 2021. In addition to Mercedes-AMG, the supplier is working on more than 10 other development programs.