2021 S-Class can park itself at Stuttgart airport
#Bosch

The redesigned 2021 Mercedes-Benz S-Class sedan is the first production vehicle available with an automated valet parking (AVP) system that works in specially equipped third-party garages, according to the carmaker.

The technology, which was developed by Bosch, allows motorists to remotely park and summons their car via a smartphone app without a driver or passenger inside.

In conjunction with parking garage operator Apcoa, Mercedes and Bosch will test the system at one of the garages at the Stuttgart airport in Germany. 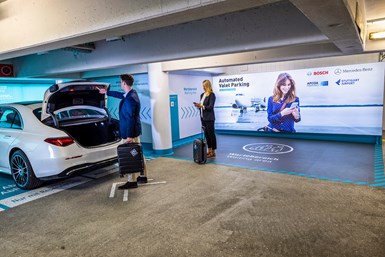 Users activate the system after exiting their S-Class at a designated drop-off point at the entrance of the garage. The car then drives itself and parks in one of two spots reserved for the program. Additional parking spaces will be added based on demand and availability of the technology.

A control center in the garage plots the vehicle’s route to reach an open space. The driverless cars can navigate between multiple levels of the garage, including through narrow passages and tight turns.

The airport program follows earlier tests at the Mercedes-Benz Museum parking lot in Stuttgart with prototype systems in E-Class sedans. 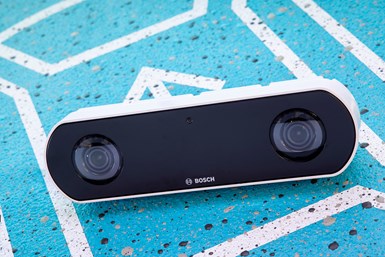 Several enhancements have been made since that program was launched last year.

They include new Bosch video cameras that can identify driving lanes and vacant spaces, and detect pedestrians and other obstacles. Previously, such capabilities required the use of more expensive lidar devices, according to the partners.

Bosch sensors also are deployed in the parking garage.

As with human valets, the automated system is quicker and easier than owners having to park their cars themselves.

Because no doors need to be opened, cars also could be parked much closer to each other. Mercedes estimates parking volume could be increased by 20% it the entire garage was automated.

The partners plan to expand the system to more vehicles and more facilities in the coming years.