Two sizes of e-vans to be deployed across Europe.
#Amazon #MercedesBenz #europe

Daimler has landed its biggest electric-vehicle order ever: a deal to supply 1,800 battery-powered delivery vans to Amazon.

Separately, Daimler has joined The Climate Pledge co-founded by Amazon to become carbon-neutral by 2040—a decade sooner than the targets set in the Paris Agreement. 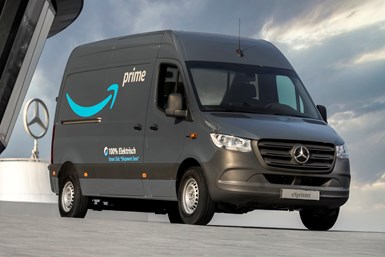 The Amazon supply deal calls for 600 midsize Mercedes-Benz compact eVito vans and more than 1,200 bigger eSprinter panel vans. Deliveries are to begin later this year, with all vehicles being deployed in Europe.

Amazon and Daimler collaborated on developing charging infrastructures at Amazon Logistics facilities in Bochum in 2018 and Essen last month.

Daimler’s eVito van is designed for last-mile delivery work in urban settings at speeds under 50 mph. Depending on intended use, the vans can be configured to run at speeds as great 75 mph or for passenger hauling for as far as 262 miles per charge.

The larger-capacity eSprinters as configured for Amazon will be able to haul 388 cu ft of cargo weighing nearly one ton for about 100 miles per charge. The vans will be fitted with 55-kWh batteries that can be fast-charged to 80% capacity in 25 minutes.

Daimler notes that EVs are well-suited for the burgeoning courier, express and parcel delivery services.

In all cases, the company points out, routes can be planned in advance, trips are short and within the capabilities of electric powertrains and distribution centers generally have the room for large charging areas.