Daimler aims to be in the fuel cell business for the long haul.

The company, which has been developing the hydrogen-fueled technology for more than 30 years, took the wraps off the concept Mercedes-Benz GenH2 Truck this week in Germany.

Daimler calls it the beginning of a “fuel cell push” for its heavy-duty truck segment.

But it still has a few more years before reaping the rewards of its efforts.

Customer trials of the GenH2 aren’t due to begin until 2023. If all goes well, sales will follow sometime in the second half of the decade. 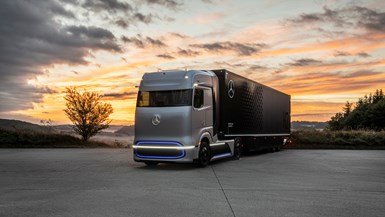 The new era kicked off earlier this year with a preliminary agreement between Daimler and Volvo Group to co-develop fuel cell-powered trucks. The proposed joint venture would encompass all of Daimler’s current fuel cell activities.

The GenH2 targets the performance of the diesel-powered Mercedes Actros long-haul truck in terms of tractive power, range and other attributes. Daimler says the production version of the fuel cell model will have a gross vehicle weight of 40 tons and a payload of 25 tons.

Driving range is expected to be 1,000 km (621 miles) on a tank of hydrogen. This is five times the distance of next year’s all-electric variant of the Actros and double the capacity of the eActros LongHaul model due in 2024.

Daimler says the liquid format has a significantly higher energy density than its gaseous cousin. This enables smaller and lighter storage tanks, which the carmaker notes enhances driving range and passenger cabin space.