Daimler Chairman Ola Kallenius outlined an aggressive, five-year strategy for the company’s Mercedes-Benz luxury unit on Tuesday morning during a virtual presentation to analysts and investors. 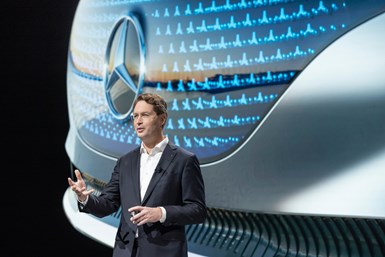 “We will make a leap forward in technology. We will invest where we can win, grow more intelligently and reshape our industrial footprint,” he explains. “As a result, we will be able to improve profitability and lift shareholder value.”

Much of the growth hinges on a coming wave of next-generation electric vehicles.

The rollout begins next year with the EQS luxury sedan that Mercedes says will have a 700-km (434-mile) driving range on the WLTP cycle. It will be followed by the EQE sedan, EQS SUV and EQE SUV, all of which will be underpinned by Mercedes’ upcoming large car EV architecture. 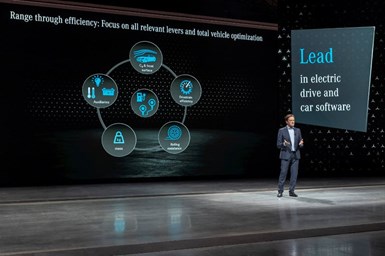 After 2025, Mercedes will launch a second dedicated electric platform, the Mercedes-Benz Modular Architecture (MMA), designed for compact and midsize cars.

In addition to new vehicles, Mercedes will shift more of its product development resources and expertise to electric drive systems, including internally developed electric motors and inverters. The company also is launching a new technology program, dubbed Vision EQXX, that targets “spectacular efficiency and range” that can quickly be applied to production cars.

Electrified models are expected to account for more than half of Mercedes’ global vehicle sales by 2030, according to Markus Schafer, Daimler r&d chief and Mercedes COO. By that time, the number of piston engine variants Mercedes offers will be 70% fewer than are available today.

Schafer also expects EVs will contribute to the company’s bottom line. “From 2025 on, we are targeting strong contribution margins for all new architectures,” he says, “thanks to high commonality and controlled investment, and ongoing falls in the cost of battery systems.” “The new strategy will take them to the next level, accelerating their development, with clear and targeted plans to unlock their potential and drive substantial incremental EBIT growth,” Mercedes says.

The first electrified AMG model is due next year. The unit also will intensify its partnership with Formula One racing in 2021.

Plans for Maybach include expanding internationally and doubling its global sales volume.

Estimating that its connected fleet will total 20 million vehicles by 2025, Mercedes says that targeting such applications will spark rapid growth and boost overall brand loyalty. 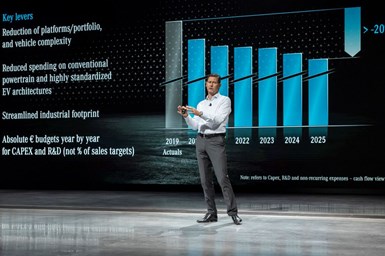 The new strategy also calls for trimming fixed costs, capital expenditure and r&d costs by more than 20% by 2025 compared to 2019 levels. The targets will be achieved via a combination of reduced spending, capacity adjustments and lower personnel costs, according to the carmaker.

Variable costs will be reduced by 1% per year through 2025, including “increased and prolonged savings” for material costs.

Savings also will be achieved through manufacturing processes. The redesigned S-Class sedan, for example, takes 25% less time to build than its predecessor.

“We will focus on winning where it matters: dedicated electric vehicles and proprietary car software,” Kallenius asserts. “We will take action on structural costs, target strong and sustained profitability.

“We intend to build the world’s most desirable cars.”