Mercedes-Benz is pulling the plug on its first pickup truck, the midsize X-Class, less than three years after the vehicle’s mid-2017 launch.

Global sales (Australia, Europe, South Africa and the Middle East) of the vehicle totaled just 15,300 units last year, down about 8% from 2018 levels. Production will end in May. 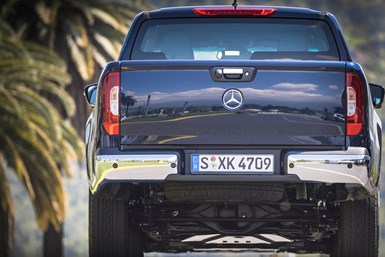 Developed in partnership with Renault-Nissan, the X-Class was meant to be a premium alternative to vehicles such as the Volkswagen Amarok, Toyota Hilux, international edition of the Ford Ranger and the Nissan Navara on which it’s based. But at a starting price of more than €37,300 ($41,250) in Germany, the Mercedes model was a tough sell in the competitive market.

Stretch goals of eventually selling the truck in the U.S. never materialized; hefty import taxes would have made local production a necessity to seriously consider such an option. Mercedes also acknowledged that pricing concerns prevented it from offering the truck in Argentina as it originally planned.

The X-Class’ serves as a cautionary tale about the uncertainty of expanding into unfamiliar segments and the limits of badge engineering. The truck also was plagued by multiple recalls.

But the lesson was a relatively inexpensive and quick one for Mercedes. Not only did the X-Class benefit from sharing a platform with the Navara (known as the Frontier in the U.S.), it also was produced on a contract basis by Nissan in Spain.

Noting that the X-Class was an attempt to enter a niche market, Mercedes is now moving full-speed ahead with more mainstream plans.

The company reportedly has 30 new and revised models in the works that are due launch by the end of 2022, sources tell Autocar. The rollout is expected to include five electric vehicles and several hybrids, all of which will go much further to help Mercedes meet more stringent fuel economy and emissions standards than the X-Class.