Michigan is at it again.

The state’s legislature hopes to buttress already-powerful laws to block carmakers under any circumstance from selling their vehicles factory-direct rather than through a local dealer network.

Michigan laws staunchly defend the traditional franchise system. Their intent is to prevent carmakers from competing with their own dealers. 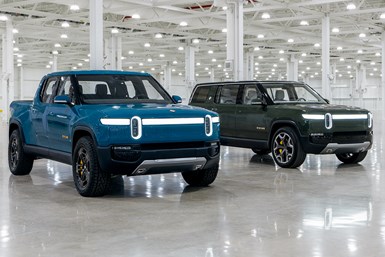 Rivian’s pickup truck and SUV may be not be welcomed in their home state. (Images: Rivian Automotive)

Tesla has long contended that there can be no competitive issue in the company’s case because it doesn’t have an independent dealer network. Tesla filed a lawsuit over the matter after Michigan’s legislature amended existing franchise laws in 2014 specifically to block Tesla from doing business in the state.

To resolve the case, the state attorney general agreed in January to a narrow deal that enables Michiganders to take delivery of a Tesla car without going to another state to pick it up—as long as the vehicle is titled outside Michigan.

The same agreement allows Tesla to service the company’s cars in Michigan, but only if the work is performed by employees of a Tesla subsidiary rather than the company itself.

Last week, Michigan’s legislature introduced a bill that, in essence, would block all other direct-sales carmakers from doing what Tesla is allowed to do.

Public policy chief James Chen grouses to Bloomberg News that dealers are “protecting a monopoly through legislation.” He says Rivian will probably begin marketing its pickups and SUVs in states such as California and Illinois, which are more tolerant of alternate sales models.

Rivian will produce its vehicles at a former Mitsubishi Motors factory in Normal, Ill.