The American Center for Mobility (ACM) in Ypsilanti Township, Mich., is opening a Technology Park to help attract more business for the sprawling 2-year-old complex. 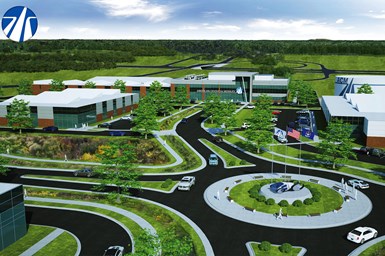 Some 350,000 sq-ft of “shovel-ready” space is available to build on. The park promises to give tenants easier access to ACM’s various testing areas—but they still would have to rent time separately.

ACM envisions a mix of traditional automotive companies, tech firms, mobility startups, academic institutions and government agencies using the space to develop and collaborate on connected and autonomous vehicle systems. At full capacity, an estimated 1,200 people could work at the park.

Potential uses for buildings include:

If You Build It, Will They Test?

But no one has put their name on the dotted line yet. Granted it’s early in the process, but there are some potential concerns: namely that carmakers, large suppliers and some tech companies already have their own test tracks and, in some cases, are using public roads to gather real-world data.

Since ACM opened in 2018, some 50 companies have made use of the testing complex. Among the group are several carmakers, including Ford, Toyota and Hyundai, each of which ponied up $5 million as founder-level sponsors (along with AT&T and Visteon).

Three to five companies use the complex on a typical day. At that level, ACM estimates it’s running at about 30% capacity.

Noting that ACM is a non-profit organization, Chaput says the site needs only to cover its operating expenses to be successful. This was achieved last year. Chaput expects a significant improvement in 2020, but he didn’t provide any details.

It’s all about testing capabilities and size, which in this case matters. Located on a 500-acre site, ACM’s boasts a:

The complex allows users to conduct tests that they otherwise may not be able to do. One example: The U.S. Dept. of Energy is testing truck platooning at much higher speeds and at closer following distances than is possible on public roads.

Despite having its own facilities, Ford has used ACM extensively. The center allows it to conduct highly customized and repeatable tests, notes Mark Milioni, a research analyst for the company’s autonomous vehicle operations. He says the complex also fosters a collaborative environment that enables Ford to work with various suppliers.