It’s been clear for several years that the future of the auto industry is moving toward automated, connected, electrified and shared (ACES) vehicles—although exactly how quickly and to what extent such technologies take hold is debatable.

But it’s not just the vehicles themselves that are changing. The surrounding infrastructure also needs to be transformed to better support next-generation mobility systems.

To this end, Michigan is throwing down the gauntlet with a new initiative that aims to build on Detroit’s Motor City heritage and position the region for what’s next. 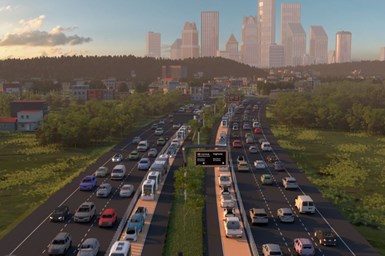 Michigan’s vision of a Connected and Autonomous Corridor from Detroit to Ann Arbor (Images: SIP and MDOT)

On Thursday, state and local leaders in Michigan announced plans for a connected and autonomous vehicle (CAV) corridor that will run from downtown Detroit to Ann Arbor (about 42 miles) over highways and city streets.

Described as a first-of-its-kind program, the network would serve as a real-world testbed for emerging ACES technologies. This includes a mix of connected and autonomous vehicles—starting with traditional transit buses and shared mobility shuttles, then expanding to freight and personal vehicles.

The proposed project gives Michigan the “opportunity to not only drive this evolution in the production of vehicles, but also on the very roads they drive on,” says Trevor Pawl, who last month was appointed to the newly created position of Michigan’s chief mobility officer. 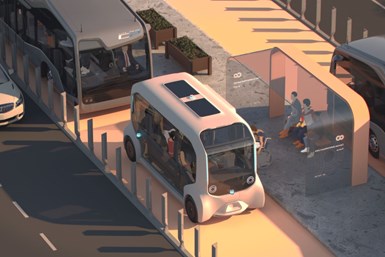 Chief among the goals of the ambitious project are to improve safety and traffic flow, while better coordinating transportation options. This includes “closing long-standing gaps in access to transit” and assisting underserved communities.

Under the plan, the corridor would include dedicated CAV lanes, high-definition mapping and V2X (vehicle-to-everything) communications capabilities that allow vehicles to share information with each other, the infrastructure and third-party partners.

Stops are planned at about a dozen “opportunity zones” to better connect the surrounding communities with local businesses, hospitals and other services, universities, transportation centers, technology parks, test tracks and automotive partners. Likely destinations include Detroit Metropolitan Airport and the University of Michigan (U-M).

The announcement kicks off a 2-year feasibility study (phase one of the project) led by Sidewalk Infrastructure Partners (SIP), a New York-based smart city development group that was spun off from Google parent Alphabet Inc. last year.

SIP’s new Cavnue subsidiary will work with the Michigan Dept. of Transportation and other state agencies and industry partners to identify potential routes, services, OEM-neutral technologies and standards, costs, financing models, goals and other parameters of the project. Initial findings and a budget proposal are due to MDOT by early 2022. 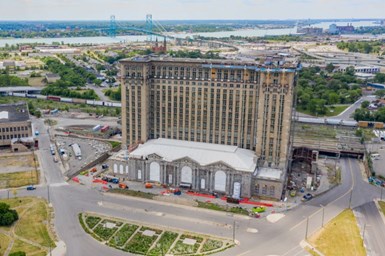 An industry advisory committee also has been set up that includes representatives from Argo AI, Arrival, BMW, Honda, Ford, General Motors, Toyota, TuSimple and Alphabet’s Waymo unit. U-M and the American Center for Mobility testing complex in nearby Ypsilanti, Mich., also are listed as partners.

If approved, the project then would move on to the construction phase. Pawl says it’s too early to set any timelines for completion or preliminary cost estimates for the project. The feasibility study will be funded by SIP.

The project promises to accelerate the auto industry’s ongoing transformation toward ACES and advanced mobility services.

It also is an important part of Michigan’s strategy to fend off competition from Silicon Valley and other high-tech regions, helping to ensure Detroit and the surrounding area continue to be the U.S. epicenter for all things automotive, including an r&d hotspot for advanced technologies.

The announcement, which was made in front of the former Detroit central train station that Ford is converting into a new mobility tech campus, was headlined by Michigan Gov. Gretchen Whitmer and Detroit Mayor Mike Duggan. They were joined by several other state and local leaders, along with Pawl, SIP co-CEO Jonathan Winer and Ford Chairman Bill Ford.

Here are a few highlights of what they said: 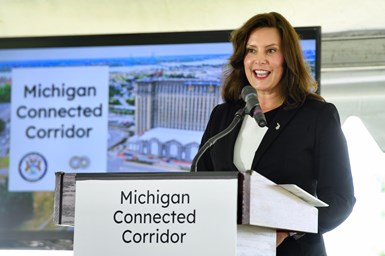 “We are taking the initial steps to build the infrastructure to help us test and deploy the cars of the future… It will be the world’s most sophisticated roadway.” – Gov. Whitmer.

“It’s never been done before… Something that could change the world.” – Trevor Pawl.

“The future of mobility will be designed and built in Detroit and southeast Michigan.” – Detroit Mayor Mike Duggan.

More information about the project HERE.