It was only a matter of time. In fact, it could be argued that many everyday electric scooter riders (scooterists?) already drive like they’re on a race track.

Now it’s official. A group of Formula One and Formula E (which itself is an F1 offshoot) honchos are starting a race series for the electrified two-wheelers. Dubbed the eSkootr Championship, or eSC, the circuit is due to start next year in unnamed cities around the world.

Fitted with fat tires, large standing platforms and full suspensions, the purpose-built scooters will be capable of speeds of 100 km/h (62 mph), according to the organizers. A prototype will be unveiled later this year. 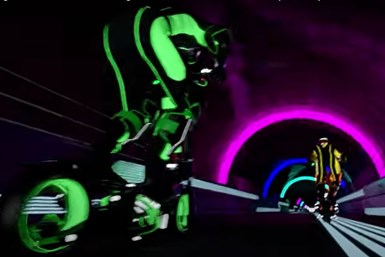 The promotional video (above) looks like a scene from the Tron sci-fi cult movie franchise. Neon race gear abounds.

Pointing to the category’s “affordability,” eSC says  teams won’t be limited by the typical cost barriers associated with other motorsports. They also expect to attract a diverse cross-section of competitors, including race car drivers, cyclists, skaters, snowboarders, motorcyclists and even amateur gamers.

Races will be held on specially designed urban venues, similar to the temporary courses used by Formula E. One possibility is to hold scooter races on the same weekend and tracks as the electric car series.

As with Formula E, eSC is more about promoting and testing the underlying technology and micromobility services than it is about winning races.

At each venue, organizers aim to bring together representatives from government, industry and other constituencies to help define policies and best practices related to micromobility, sustainable transportation and smart cities.

The new series was co-founded by CEO Hrag Sarkissian and COO Khalil Beschir. Sarkissian is a motorsports and tech entrepreneur, while Beschir is an F1 broadcaster and former A1 GP driver.

Driver Lucas di Grassi, who won the 2017 Formula E championship and also is heading up the Roborace series, is listed as eSC’s sustainability ambassador. Former F1 driver Alex Wurz will serve in a similar capacity for safety.