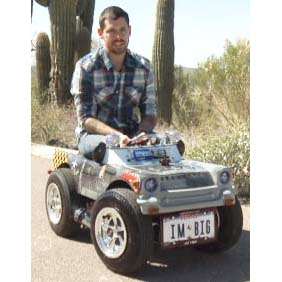 It's only about two feet tall, two feet wide and four feet long. And as of this month, it has been honored Guinness World Records 2014 as the world's smallest roadworthy car.

Austin Coulson and his mini-minicar

Phoenix native Austin Coulson built the car in nine months, beginning with an existing ATV that provided an engine and transmission. The tiny convertible, which is fitted with a body reminiscent of a 1957 Chevrolet, has no suspension, no roof and zero luggage capacity.

But to meet the Guinness requirement for roadworthiness, it is equipped with functioning with wipers, turn signals, a seatbelt, horn and a 3x9-inch windshield made of federally approved safety glass.

Coulson says his car can hit 33 mph and gets about 85 miles per gallon though the fuel tank holds only half a gallon of fuel. The 29-year-old inventor notes that the one-seater is classified as a low-speed vehicle and thus is licensed to drive only on roads with a speed limit of 25 mph or less. He figures he has driven the vehicle about 100 miles so far.

Coulson's car barely beats the previous record holder, a fully enclosed van built in the U.K. four years ago, in length and width. But with no top, it is roughly half the height of the older car.