Last month, Mitsubishi Motors hinted that it may scale back its North American operations as part of a broader global realignment by the Renault-Nissan-Mitsubishi alliance.

But the struggling Japanese carmaker isn’t throwing in the towel yet. In fact, it’s planning a new model rollout over the next year that features additional content, new styling and the next-generation Outlander crossover.

The updated lineup will include:

All Mitsubishi vehicles—including the Outlander Sport compact crossover, which received a facelift last year—will get more standard features, according to the carmaker. This includes forward collision mitigation with pedestrian detection and other active safety systems.

Bigger, bolder and better than ever. At least that’s how Mitsubishi describes the all-new Outlander.

The carmaker says the vehicle will incorporate the company’s latest design language and be the quietest and best-equipped Mitsubishi ever sold in the U.S. The fourth-generation crossover will share a platform with the redesigned Nissan Rogue.

A global unveiling is planned for early 2021. The current Outlander debuted as a 2014 model.

The Outlander PHEV, which Mitsubishi says is the world’s best-selling plug-in hybrid, will get a larger, more powerful engine and an updated electric drive system. The latter will provide a more refined ride and an increased all-electric driving range (the current model is rated at 22 miles), according to the carmaker. 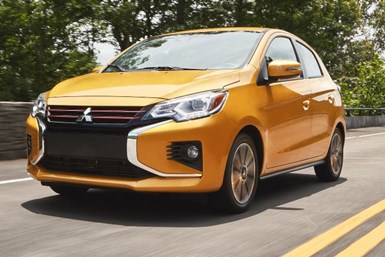 The Mirage/Mirage G4 small cars, which start at under $15,000, will get extensive exterior styling and interior trim changes. Mitsubishi says the vehicles are the most fuel-efficient non-hybrid gasoline-fueled models in the U.S.

The redesigned Eclipse Cross also features major front and rear design enhancements, taking cues from the new design DNA. The revised interior will be highlighted by a new infotainment system.

After cratering during the great recession in 2008-2009, Mitsubishi’s sales have slowly inched up in the U.S. Volume increased nearly 3% last year—the seventh straight annual uptick—but still tallied only a relatively paltry 121,000 units. 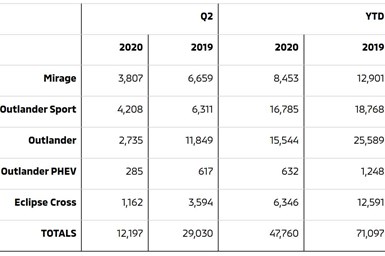 Despite the upward trend in North America and other so-called mega-markets, at last month’s shareholders meeting CEO Takao Kato said the company hadn’t achieved the “level of profit we expected.” The company posted a net loss for the fiscal year ending March 31.

The situation has worsened this year. Through the first half of 2020, unit sales in the U.S. plunged 33% as the coronavirus wreaked havoc throughout the industry.

Mitsubishi now is counting on the upcoming new product rollout to jumpstart its efforts.