Toyota was the most Google-searched car brand in one-third (57) of 171 countries tracked over the last year by U.K. insurance provider Veygo, which is part of the Admiral Group.
#Chevrolet #BMW #Suzuki 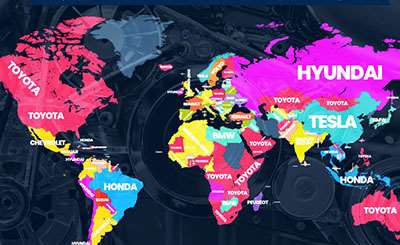 Toyota was the most Google-searched car brand in one-third (57) of 171 countries tracked over the last year by U.K. insurance provider Veygo, which is part of the Admiral Group.

Toyota also was the most-searched marquee globally with an average of 7.8 million inquiries per month. Honda (7 million) and Ford (6 million) were next in total searches but topped the list only in five nations for Honda and three for Ford.

Toyota was the most-searched brand in the U.S., Canada and Australia, plus parts of central and southeast Asia, much of sub-Saharan Africa and the Middle East.

BMW was the most popular brand in 25 countries, with a strong presence in east Asia (Japan and South Korea), the Middle East and central Europe. Mercedes-Benz was next-best, leading the way in 23 countries.

Hyundai was the most searched brand in 14 countries, fueled by a strong presence in Russia and other former Soviet Union countries. Lamborghini topped the list in 12 countries, while Tesla led the way in China and six other countries. Chevrolet intrigued the most searchers in five countries, including Mexico and four South American nations.

A similar study last year by U.K. auto parts chain Quickco also declared Toyota the most searched brand on Google, topping the list in 74 countries. BMW (51) and Hyundai (17) placed second and third in the results.

See a full list of this year’s results HERE.