Basic functionality could be achieved this year, but real-world applications not likely anytime soon
#Tesla

Tesla soon will have the software capability to enable its vehicles to operate fully autonomously, CEO Elon Musk claims.

And by very quickly, he’s talking about as early as the end of 2020. As in this year…less than six months from now.

Reiterating previous assertions, Musk said: “I remain confident we will have the basic functionality for Level 5 autonomy complete this year."

To be clear, this likely means production-ready rather than in production. But it still would be a big deal.

The latest version of Tesla’s Autopilot technology—one of the most advanced systems available—typically is characterized as Level 2 or 2+ on the SAE spectrum. This means a car can operate itself under certain situations, but the driver must keep his or her attention on the road at all times and be prepared to quickly take control if needed.

Getting to Level 3, let alone 4 or 5, would be a huge jump. It’s something critics doubt Tesla is ready to do, noting that cars operating in Autopilot mode continue to be involved in accidents, including a few high-profile fatalities.

Tesla has made numerous upgrades to Autopilot since launching the system in 2015.

From a hardware perspective, Tesla claims Autopilot has been primed for full autonomy for about four years. Owners can equip their EV with the package for $8,000 and add over-the-air software updates as they become available.

Now Musk says there are no fundamental software challenges remaining to prevent full autonomy. But, he concedes, there still are many small problems that need to be addressed. 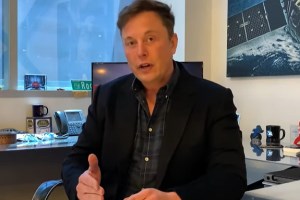 “You’re able to handle the vast majority of situations. But then there will be something very odd,” Musk said during his WAIC presentation, adding that this is why real-world testing is needed.

It’s highly unlikely (i.e., definitely not going to happen) that Tesla or any other carmaker will offer a fully self-driving car—capable of completing a trip on its own without any human input—this year. Or next year. And possibly not for several years after that.

In addition to solving technical issues (small and otherwise), the industry is struggling with standardization and legal considerations. There’s also a matter of getting the public on board.

For now, much of the industry’s focus has shifted to refining Level 2 systems and developing niche applications for full autonomy. The latter includes geofenced robo-taxis and delivery pods.