A yellow flag signifies caution in motorsports, usually while debris is being cleared following an accident. Drivers are allowed to circle the track, but at reduced speeds, and no passing is allowed until conditions return to normal.

In a way, Sunday’s entire NASCAR event in Darlington, S.C., was held under a metaphorical yellow flag. That’s a good thing.

The racing was at full throttle, with plenty of action, accidents and drama.

But it wasn’t business as usual. Caution was the rule of the day to protect participants in the first race back following a two-month layoff spurred by the coronavirus.

For starters, no fans were allowed to attend. Only about 900 people were permitted inside the stadium, including drivers and their support teams, track staffers, NASCAR employees and other personnel.

Everyone had to pass a temperature scan before entering. They also had to wear masks, except when drivers had their helmets on, throughout the day.

Even the name of the race reflected the new conditions. It was called "The Real Heroes 400" in honor of healthcare workers and others on the front line in the fight against the coronavirus pandemic. Names of doctors, nurses and emergency responders were substituted for the drivers' name above the door on each of the 40 cars entered in the race.

The Race Goes On

From a racing standpoint, NASCAR picked up essentially where it left off (not counting recent virtual races) when live racing was suspended after the March 8 event in Phoenix. 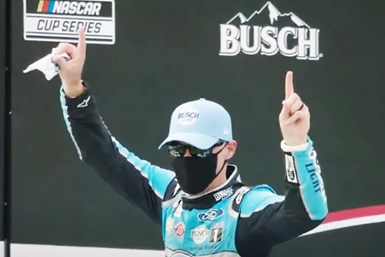 Points leader Kevin Harvick coasted his Ford Mustang to a victory by more than two seconds over Alex Bowman’s Chevy. Rounding out the top five were Kurt Busch, Chase Elliott and Denny Hamlin. Ryan Newman, who was seriously injured in an accident at the Daytona 500 in February, returned to finish 15th.

Harvick led a race-high 159 laps in the 293-lap event and took the lead for good on lap 216. The win was the 50th of Harvick’s career, which puts him 12th on NASCAR’s all-time list. He trails only Jimmie Johnson, who was involved in an early crash on Sunday, and Kyle Busch among active drivers. Harvick has won at least one race in each of the last 11 seasons.

The on-track, post-race interview, which was conducted without masks, had Harvick speaking into a boom microphone to help keep his distance from the interviewer.

Darlington will host two more races this week, including a second-tier Xfinity Series event on Tuesday and a shorter Cup Series race on Wednesday. This will be followed by the Coca-Cola 600 in Charlotte over Memorial Day weekend.

So far, about 20 races across NASCAR’s three tiers (Cup, Xfinity and Gander RV & Outdoors Truck) have been packed into a compressed schedule through mid-June. All of these events are due to be held in empty stadiums.

Fans may be allowed to return to the tracks later in the season. For now, it’s good to see real racing again—and that the sport is erring on the side of caution to help keep everyone safe.