A 3-year pilot program is due to begin this autumn on public roads in Sweden with a fleet of 10 vehicles. Consumers will be able to book rides in select cities via a smartphone app. 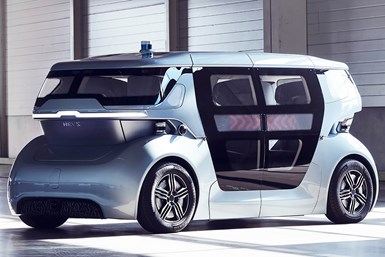 The interior has three rows of seating that can be arranged in various configurations. In privacy mode, partitions can be raised to create four individual compartments with their own air filters and HVAC settings.

In the “social” setting, the partitions are lowered and the four seats are facing each other. The “family” mode is arranged like a traditional MPV that can accommodate six people in three rows.

Sango’s plug-and-play architecture can be teamed with any available autonomous vehicle software platform, according to NEVS. 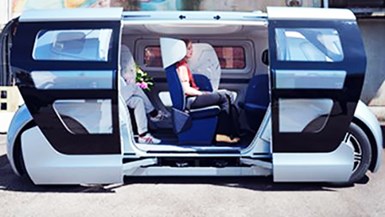 For now, the company is working with Silicon Valley-based startup AutoX, which will provide the Sango’s artificial intelligence-based processing technology. The car’s sensor suite includes a roof-mounted lidar unit, several cameras and additional lidar sensors positioned around the vehicle.

The car’s 62-kWh battery provides an estimated 120-mile range on the WLTP cycle. It can be fully recharged in about five hours or replenished to 80% capacity in less than three hours.

Top speed will be limited to about 30 mph.

NEVS says it also has developed a fleet management system to coordinate routing, maintenance and other data services for the vehicles.

NEVS, which was founded in 2012 after acquiring the assets of Saab Automobile, has about 800 engineers in Sweden. Chinese property developer Evergrande Group purchased a 51% stake in NEVS in early 2019.

Last summer, NEVS began making an all-electric car based on the discontinued Saab 9-3 sedan at its factory in Tianjin, China.

The company also operates a car-sharing service in Stockholm that allows members to rent out their personal vehicles.