New Caddys Up the Ante on Fast-Acting Suspension Tech 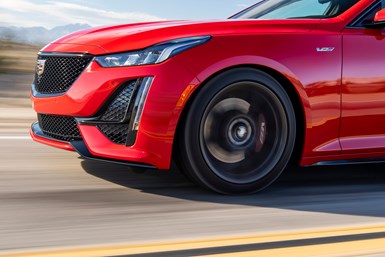 That’s saying something, considering the previous-generation technology already was touted as the fastest in the world.

So how fast is it? GM previously has said MagneRide can respond to road variables in 5 milliseconds, which is more than 100 times faster than it takes to blink your eyes.

Developed by Delphi about 20 years ago, MagneRide features magnetorheological fluid within the shock absorbers teamed with electromagnets to continually vary damping rates. 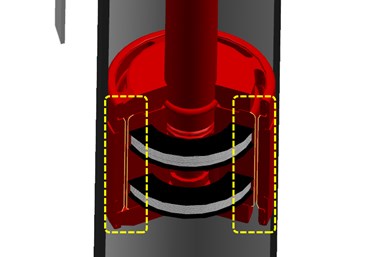 Magnetorheological fluid flows through the shock absorber piston in the yellow highlighted areas.

Wheel accelerometers monitor the upcoming road 1,000 times per second, triggering changes in the magnetic charge that in turn alter the fluid’s viscosity. The higher the viscosity, the stiffer the damping.

The process is designed to maximize tire-to-road contact to improve driving dynamics under varying road conditions.

Nearly every aspect of MagneRide has been enhanced, including the sensors, controller hardware, dampers and vehicle tuning methods. Cadillac calls the changes the most comprehensive updates since the suspension technology debuted on the 2002 Cadillac Seville STS.

The fourth-generation system also gets a new magnetorheological formulation that is designed to reduce friction within the damper to further enhance performance. A “significant” overall reduction in damper friction results in a near “no damping” effect that enables engineers to tune for more pronounced differences between drive modes, the carmaker adds.

MagneRide 4.0 debuts this autumn as standard equipment on the CT4-V and CT5-V performance sedans. The technology also will be available early next year as an option on the CT5 Sport and standard on certain trim lines of the all-new Escalade SUV.

The fourth-generation system is supplied by BWI Group, which acquired Delphi’s former Chassis Division in 2009. In addition to General Motors, BWI has supplied previous versions of the technology to Audi, Ferrari and Ford.