Herbert Diess, CEO of both Volkswagen Group and its VW brand, will give up the latter job on July 1.

The company says the move will enable the executive to focus entirely on shepherding the group’s brands through a massive shift to electrification and digitalization.

Observers say the plan also aims to ease continuing friction between Diess and the company’s powerful works council, most recently over launch glitches with the eight-generation of the best-selling VW Golf hatchback and equally critical ID.3, an all-electric model that resembles the Golf. 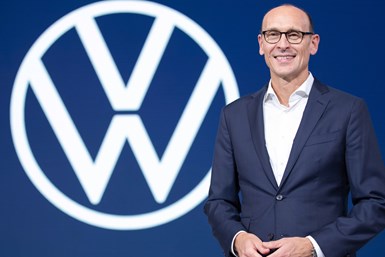 The new VW brand CEO will be Ralf Brandstaetter, who has been serving as chief operating officer for nearly two years. Diess says Brandstaetter’s primary role will be to implement the path Diess has outlined for the VW brand under his “Transform 2025+” strategy.

“The course towards the future has been set,” Brandstaetter agrees. He says his objective is to make the VW brand a leading source of “carbon-neutral mobility” and, longer term, to “forge ahead with digitalization.”

The first phase of Transform 2025+ was largely to pivot the brand away from diesels and toward electrification. Brandstaetter is stepping in to implement phase 2: putting at least 1.5 million electric cars on the road by 2025.

The 51-year-old was born near VW Group headquarters and joined the company as a shopfitter in the local VW plant in 1993. He soon began a rise through a succession jobs in purchasing and new vehicle launch programs.

Brandstaetter joined the VW brand’s management board in 2015. He was promoted to COO in August 2018, in large part because of strong support from VW’s powerful works council.

VW brand operations have been undergoing a fitness makeover since Diess, the former product development chief at BMW, arrived as head of the VW brand in 2015 with a reputation as a cost-cutter. 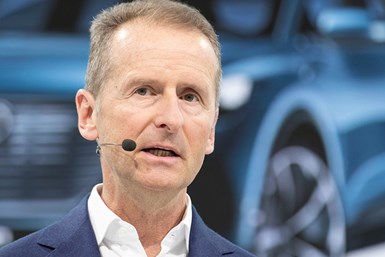 His immediate assignment was to lead the brand out of its diesel emission cheating scandal. But Diess also saw trouble ahead if VW failed to overhaul its practices, shed noncore assets and streamline its supply chains to support the shift from piston power to electrification.

By early 2017, he was tangling with VW’s works council over his goal of eliminating 20,000 jobs by 2020. He remained adamant after adding the job of group CEO in 2018. VW, he declared, needs a “radical overhaul” to remain a major player in the auto industry. “The time of traditional car manufacturers,” he opined, “is over.

Brandstaetter’s new assignment is likely to ease, but not eliminate, labor strain at the VW Group’s flagship brand. And, as the company points out, it frees up Diess to continue pushing his plan to transform the group.