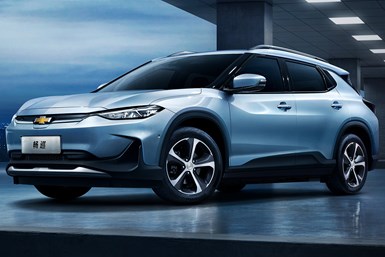 The new compact model, which starts at about 159,900 yuan ($22,700), has a sporty design and is equipped with some of GM’s latest driver-assist technologies.

In terms of performance, the Menlo makes 148 hp and 258 lb-ft of torque. It can travel 255 miles (under the European driving cycle) on a full battery and can be charged to 80% capacity within 40 minutes using a DC fast charger.

While not earth-shattering, the Menlo should be competitive in its class.

The bigger news? The Menlo finally gives Chevy an EV in China, which is by far the largest market for such vehicles. It joins the Buick Velite 6 in GM’s EV lineup there.

The Menlo also is one of the first in the new batch of EVs GM is readying as part of its plans to “create an all-electric future.” Some 20 new EVs—including the GMC Hummer and several Cadillac models—are due to bow worldwide over the next three years.

GM will produce the Menlo through its joint venture with SAIC Motor Corp., which also builds the Velite. Styling was inspired by the 2017 FNR-X concept vehicle. 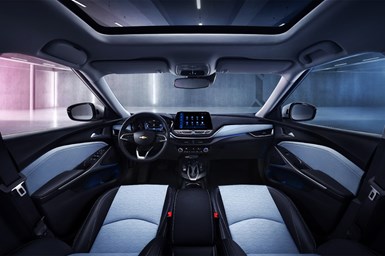 Sitting on a 105-inch wheelbase, the Menlo stretches to about 184 inches from bumper to bumper. This makes it about 20 inches longer than the U.S.-market Bolt, although that vehicle is two inches taller.

Chevy says the Menlo has 38 cu-ft of cargo space and 28 storage compartments. Other highlights include: