While one might think of the 2020 Land Rover Defender as the kind of vehicle that allows people to traverse all manner of terrain without a second thought, the company is deploying technology in the SUV that allows you to not only do that, but to do so while (1) assuring that your vehicular system is fully up to date software-wise and (2) allowing you to stream your favorite tunes. 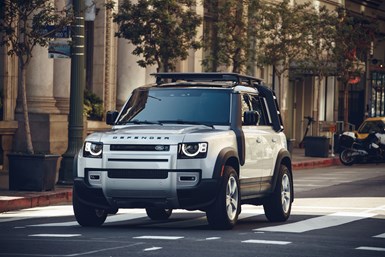 The company has announced that the Land Rover Defender 110 and 90 are being equipped—as a world’s first—two embedded LTE modems.

Explains Peter Virk, Director of Connected Car and Future Technology, Jaguar Land Rover, “With one LTE modem and eSIM dedicated to the Software-Over-The-Air (SOTA) technology and the same set-up looking after music streaming and apps, New Defender has the digital capacity to keep customers connected, updated and entertained at all times anywhere in the world. You could liken the design to a brain, with each half enjoying its own connection for unrivaled

Inside the 2020 Land Rover Defender.

and uninterrupted service. Like the brain, one side of the system looks after logical functions, like SOTA, while the other takes care of more creative tasks.”

The vehicle is deployed two Qualcomm Snapdragon 820AM automotive platforms, each of which has an integrated Snapdragon X12 modem.

One of the things that this means is that should there be a software update required, then there is no problem vis-à-vis streaming one’s favorite Imagine Dragons tunes because there are the two separate modems.

Land Rover had previously announced that there would be 14 electronic control modules on the vehicle capable of being remotely updated. It has now increased that number for the first production vehicles to 16—and it anticipates that by the end of 2021 that number will rise to 45.

The New Defender features what is called the “Pivi Pro” infotainment system that is equipped with its own battery. It is always on. So when the driver, say, gets in and wants to put in navigation coordinates, the system is ready to go.

In addition to Qualcomm, Jaguar Land Rover is working with BlackBerry QNX for an operating system, CloudCar for the cloud-based services platform, and Bosch for various advanced driver assistance system (ADAS) technologies.