New EV Application is All About the Money

German security specialist Prosegur transports more than $650 billion of cash and other valuables per year in its armored trucks.

This month, the company added an electric-powered model to its 900-unit fleet. The EV is said to be a world-first for an armored money truck.

And more are expected to be charging ahead soon. 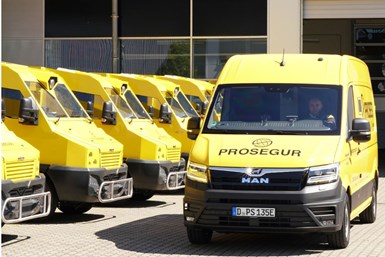 Prosegur is using an armored variant of the MAN eTGE electric van for its security vehicles. (Image: Prosegur)

The vehicle is a modified version of MAN’s eTGE electric panel van, which debuted earlier this year. Stoof International fitted the Prosegur vehicle with FB3-class armor designed to withstand a shot from a .357 Magnum handgun.

MAN, which is part of Volkswagen’s Traton commercial truck unit, used a variety of lightweight materials to keep the fullsize van’s weight at 6,900 lbs (including the armor). The truck also features a variety of advanced driver assist systems and surround-view security cameras.

Powered by an electric motor and 36-kWh battery, the front-wheel-drive armored eTGE has an estimated driving range of 115 km (71 miles) on the WLTP cycle. 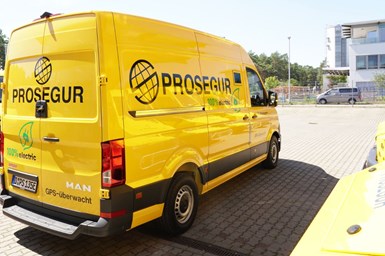 That makes it well suited for urban-focused deliveries. Most of its armored trucks used in such applications travel fewer than 45 miles per day, Prosegur notes.

MAN says that 70% of all light commercial vehicles used in urban areas travel 60 miles or less.

The battery can be replenished to 80% capacity in 45 minutes via a 40-kW charger. It takes about nine hours to fully charge the battery using a 220-volt AC unit.

Prosegur plans to add additional armored EVs to its fleet as it replaces older models.

But it notes that the added armor reduces the vehicle’s payload capacity, which could limit some applications.