New EV Heating Concept is on the Money

But applying focused engineering knowhow can yield innovative results, even when it comes from unexpected sources—including those whose primary business is money.

To this end, engineering specialist IAV Group has teamed up with a non-traditional partner to develop a new way to heat passenger compartments and boost the driving range of electric vehicles.

In this case, the partner is Louisenthal, which is a subsidiary of the Giesecke+Devrient Currency Technology. The German company is one of the leading developers and suppliers of banknotes (including the euro) and security paper. It literally prints money for governments and central banks worldwide.

Louisenthal also has an industrial applications division, which developed a conductive foil that can be installed underneath plastic components to quickly heat car interiors. 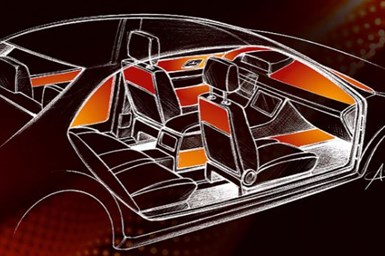 IAV, which is working with Louisenthal to adapt and validate the technology for vehicles, says simulations have shown the system can reduce the amount of energy required to heat the passenger compartment by as much as 20%.

In an EV, the improved efficiency can extend driving range by as much as 6%, according to the partners.

Dubbed SmartMesh, the system embeds a network of conductive tracks into the foil. As voltage is applied, the mesh quickly warms up and radiates heat.

The partners claim the system does the job more efficiently than current HVAC systems, which can significantly reduce driving ranges in cold weather.

The thin mesh film can be easily applied within PET and polycarbonate parts, including door panels, the center console and roof liner, Louisenthal says. Another plus: The transparent design allows the technology to be combined with ambient lighting and other LED elements.

The partners, which are talking with several potential customers, describe the system as a cost-effective way to improve an EV’s efficiency and supplement existing HVAC systems.

No timeline for commercialization was provided.