Today he named a new chief financial officer and head of manufacturing in Europe. He also announced plans to soon replace Ford’s chief information officer and the head of marketing for the Lincoln brand. 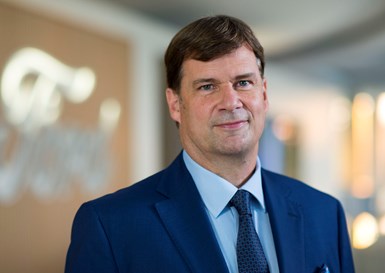 These are the first in a likely string of promotions and realignments as Farley attempts to shift Ford into high gear after years of preparation by his predecessor.

Farley says that former CEO Jim Hackett spent the past three years restructuring Ford to make it more agile and prepare it to become “a vibrant, profitably growing company.” Now, Farley declares, “it’s time to charge through that door.”

Ford will focus decision-making and accountability around product and customer groups in three regions: the Americas/International, Europe and China, according to the new CEO.

Starting today, Ford’s new CFO is John Lawler, formerly CEO of Ford Autonomous Vehicles. He is a past Ford controller and president of the company’s China operations. Lawler replaces Tim Stone, who is leaving to become CFO for ASAPP, a developer of artificial intelligence software.

In Europe, Kieran Cahill takes over today as head of manufacturing. Formerly director of manufacturing and strategic projects at Ford of Europe, Cahill succeeds Dale Wishnousky, who will retire at year-end after 33 years with the company.

Farley expects within weeks to announce a successor for Chief Information Officer Jeff Lemmer, who is retiring at year-end, also following a 33-year-long career with Ford.

Separately, Joy Falotico, who has headed global marketing for the Ford and Lincoln brand, is being assigned to the Lincoln brand exclusively. Her mission will be to further differentiate the relaunched brand. The company will announce a new Ford brand marketing chief soon.

Jim Hackett did considerable work to streamline Ford and structure it to face the evolving demands of the auto industry,. But he also attracted plenty of criticism from Wall Street analysts for not moving faster.

Farley’s success will be measured by how quickly he can prove that Ford can turn its new structure into meaningful results. That’s why he is quickly assembling his own team.