Car sales are slumping in Europe, so what’s a car company to do? Maybe it should switch to building medical ventilators.

That’s the suggestion of the British government, anyway.

The idea isn’t completely crazy. Respiratory ventilators are in very strong demand worldwide these days to treat patients with acute COVID-19, the respiratory illness caused by the coronavirus.

Demand for the machines will only go up this year as the virus spreads. And if pundits are correct in theorizing that a new variant of the virus might be spawned next year, there just might be a long-lived market out there. 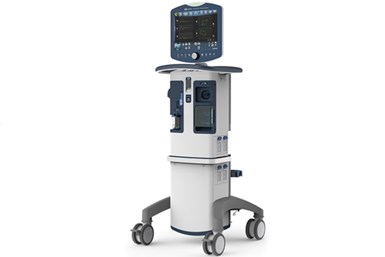 Well, it does have wheels and a center-stack display screen (Image: Puritan Bennett)

British Prime Minister Boris Johnson says he has been talking up the idea of ventilator production with several carmakers and dozens of other manufacturers that are skilled in making precision devices.

He also has been pointing out that Britain’s own National Health Service would be a built-in market and that global demand already outstrips existing production capacity.

Ford, Honda, Jaguar Land Rover and PSA—all with factories in the U.K.—confirm to Reuters that they have been approached about the project. Jet engine maker Rolls-Royce says it has been contacted too.

Johnson is urging companies to jump in wherever they feel comfortable: design, engineering, assembly, procurement, shipping, or perhaps all the above.

Just how this could be pulled off isn’t entirely clear, particularly regarding the electronics involved and the medical certification that would be required for these sophisticated life-critical machines.

But then, nobody thought Ford could learn how to make four-engine B-24 bombers at a rate of one per hour as it eventually did.

Certainly the U.K. could invoke wartime powers to speed up the manufacturing end of such a project. Whether the front-end work could be completed quickly enough to help out with the current pandemic is an open question.