The mid-engine layout pushes the passenger cabin 16 inches forward compared with the current C7 Vette. Overall, the eighth-generation 2020 model is more than five inches longer than its predecessor and sports a lower hood and sleeker windshield.

Other styling cues include hidden door handles and the addition of a front trunk. The C8 maintains the current car’s LED running lights, square taillights, “waterline” crease and fender treatment. 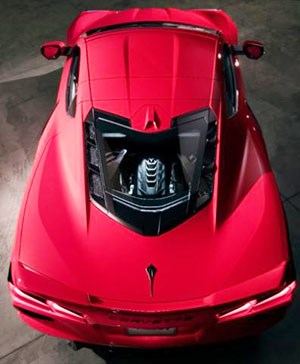 Power for the base Corvette Stingray will come from a naturally aspirated 6.2-liter pushrod V-8 that makes 495 hp and 470 lb-ft of torque. GM says the engine, which is visible through a glass cover, propels the car from zero to 60 mph in 2.9 seconds. Higher performance variants will be added later.

Dubbed the LT2, the small-block V-8 has a new vent system and a low-profile oil pan with 25% greater cooling capacity. The centerline of the crankshaft sits an inch lower to the ground, where it mates to the transaxle for better handling, according to GM. Fuel efficiency is enhanced by a cylinder deactivation system.

The only transmission available is a dual-clutch Tremec 8-speed that can be operated automatically or with paddle shifters. GM says it would have been too expensive and complex to offer a manual gearbox.

Based on inputs from sensors, the suspension automatically raises the front of the car by 1.5 inches to protect the lower bodywork from damage by potholes, speed bumps and steep driveways. GM says the system can operate through the car’s GPS system and store as many as 1,000 locations.

Boasting a mixed-material chassis that uses die-cast aluminum parts, the rear-wheel-drive two-seater has a dry weight of 3,370 lbs. The front and rear tubs and dashboard are molded from ultra-lightweight fiberglass and proprietary resin, while the curved rear bumper is made from carbon fiber. The roof can be removed and stored in the trunk.

The interior is highlighted by a 12-inch digital instrument display, center console touchscreen, Bose audio system and a variety of high-end materials. The latter range from aluminum and leather to carbon fiber and “ballistic” nylon.

A long strip of buttons located between the seats on the center console controls the seats, HVAC system and other items. Customers can choose from three types of seats: GT1, GT2 or heavily bolstered Competition. There’s 1 inch more seat travel compared with the C7 Vette.

GM will begin producing the 2020 model—in both left- and right-hand drive variants—late this year at its Bowling Green, Ky., plant. Pricing will start at less than $60,000.