The reason for the “almost” disclaimer? The new technology, which was developed with Norwood, Mass.-based electronics giant Analog Devices, reduces battery wiring by 90% rather than 100%.

GM claims it will be the first carmaker to use a wireless battery management system (WBMS) in a production EV. The technology will be introduced in conjunction with GM’s new Ultium batteries, starting with the upcoming GMC Hummer pickup and Cadillac Lyriq crossover vehicle.

The new architecture provides several advantages over current EV batteries, according to the partners. For starters, it’s a scalable system that will allow a common set of battery components to be used in everything from mainstream cars to performance models and heavy-duty trucks. 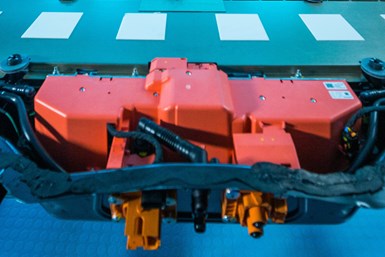 Other purported benefits include:

The system also can conduct real-time battery health checks and refocus the network of modules and sensors as needed to safeguard long-term reliability, GM says.

There’s one more advantage: GM says a wireless system makes it easier to repurpose an Ultium battery at the end of an EV’s life or when the battery capacity falls below vehicle requirements. This includes teaming several used batteries together to create what GM calls “clean power generators.”

The company also is co-developing at least two EVs with Honda and will build Nikola’s upcoming Badger pickup. All of these vehicles will use Ultium batteries, which GM is jointly developing with LG Chem.