Next-Gen S-Class on Track for 2020 Intro

Countering reports that the program had been delayed due to the coronavirus pandemic, Mercedes-Benz says it will introduce the redesigned S-Class sedan later this year as planned.

Production of the seventh-generation model is due to start in September at the carmaker’s Factory 56 in Sindelfingen, Germany. The facility will add output of the all-new EQS electric sedan next year.

A teaser image of the 2021 S-Class, released Monday on the new “Meet Mercedes Digital” platform, shows an updated version of the brand’s prominent chrome grille. The angular headlights with three projector beams reflect the styling introduced on the latest CLS and E-Class models. 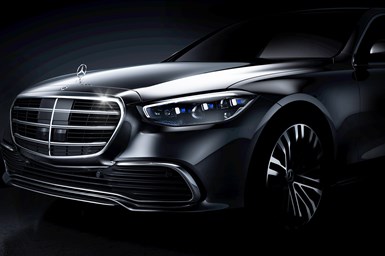 He describes the car’s ride and drive performance as “very serene and quiet.” 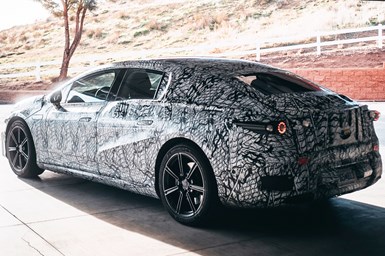 The all-electric Mercedes EQS will debut in 2021. (Image: Mercedes-Benz)

Powertrain options are expected to include a turbocharged 3.0-liter inline-six engine and a twin-turbo 4.0-liter V-8, as well as 2.9-liter diesel in select markets. A 48-volt mild-hybrid system and plug-in hybrid variant also are on tap.

The new S-Class will ride on an updated version of Mercedes’ modular rear-wheel-drive architecture. All-wheel drive will be optional.

The current sixth-generation S-Class was introduced in 2014.