The advances are expected to enhance the performance of various ADAS technologies—for both highway and city applications— and help carmakers meet future safety requirements, according to the supplier.

The system debuts this year in the redesigned Nissan Rogue crossover vehicle in the U.S.

The new S-Cam 4.8 camera, which uses Mobileye’s EyeQ4 processor, is one of the first ADAS monocular cameras with a 100° horizontal field of view. Previous-generation mono-cameras use a standard 52° FOV lens. (One of the lenses in ZF’s new Tri-Cam4 system has a 150° FOV.) 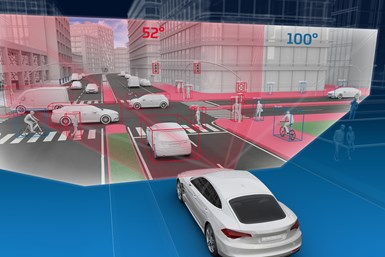 The expanded FOV is especially helpful in detecting objects approaching from the sides of a vehicle at an intersection, including vulnerable hard-to-see road users such as cyclists and pedestrians. ZF says this will enable automatic emergency braking to address a wider range of scenarios where objects are crossing into the car’s path or where the car is turning.

S-Cam 4.8 also can aid lane-keeping and lane-centering capabilities during sharp curves. Thanks to the wider FOV, the system has the ability to track both sides of the lane to allow for more reliable vehicle trajectory calculations, according to the supplier. 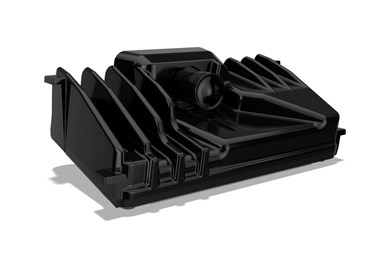 In addition, the S-Cam 4.8‘s improved thermal management bolsters the system’s computing capabilities, according to ZF. It says this can lead to more features and functions.

In U.S. applications for the Rogue, ZF will produce the new S-Cam at its facility in Marshall, Ill.

The company says it also has won several other contracts for the system with unspecified carmakers. This includes an application in Asia later this year as part of ZF’s new coAssist Level 2+ semi-autonomous vehicle platform, which will be priced at well under $1,000.

ZF says it supplies more than a dozen carmakers with ADAS sensors. In addition to front-facing cameras, the company provides radar and lidar systems.