ZF is taking a turn for the better with an enhanced version of its all-wheel-steering system.

This improves low-speed maneuverability by turning the rear wheels in the opposite direction of the front ones. At higher speeds (above 37 mph), the front and rear wheels are steered in the same direction to improve driving dynamics, which ZF notes is especially helpful during lane changes and evasive maneuvers.

The new system is expected to support broader applications than the first-generation technology, which primarily has been relegated to high-end performance models. 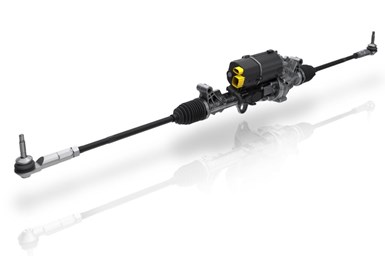 "We have further improved performance and increased networking capability, making it fit for the requirements of automated and electrified mobility," explains Ingo Hermansa, senior vice president of the Chassis Actuators Product Line at ZF.

EVs tend to be heavier and have a longer wheelbase than piston-powered vehicles, with the battery packaged between the axles in new skateboard-type platforms. This makes EVs more difficult to maneuver, especially in tight urban environments, with a conventional front-wheel steering system, ZF notes.

The new system works basically the same way as the first-generation system, which ZF introduced in 2013 on the Porsche 911.

An electronically actuated toe link adjusts the rear axle based on driving inputs such as the angle of the front wheels and vehicle speed.

The system is available in two configurations, with either a central controller or dual actuators. The latter design is aimed at sports car applications, ZF says.

Thanks to an improved adjustment stroke, the second-generation system can turn the rear wheels by as much as 10°, based on customer requirements. This more than doubles the first-generation system’s 4.5% capability.

At low speeds, the rear wheels turn in the opposite direction of the front wheels.

ZF says the system can work in conjunction with other automated parking and steering assist technologies.

The new system’s central actuators also are about 40% more powerful with an 11-kiloNewton (2,472 lb-f) of actuation force. This makes them suitable for vehicles weighing as much as 3.5 tons.

The new AKC with a central actuator will debut in an unnamed luxury vehicle late this year.

With the system, the car’s turning circle has been reduced by about two meters (79 inches), according to ZF.

Other applications are said to be in the works. ZF also has demonstrated the technology in fullsize pickup trucks.

To support growing demand for the technology, ZF has added a fourth AKC production line at its Lebring, Austria, plant.

This increases the supplier’s annual capacity to 1 million units. But the company hasn’t said when it expected to reach that threshold.

Since production began in 2013, ZF has produced more than 750,000 units (including dual- and central-actuator systems).

In addition to Porsche, the first-generation system has been used in various Audi, BMW, Cadillac, Ferrari, Lamborghini and Mercedes-AMG models.