NHTSA Moves Closer to Shift from Mirrors to Cameras

After a decade, U.S. regulators are finally moving closer to allowing the use of cameras in place of rearview mirrors in vehicles.
#tech #Tesla

U.S. regulators are finally moving closer to allowing the use of cameras in place of rearview mirrors in vehicles. 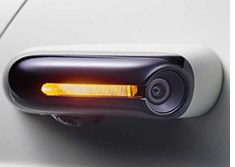 The idea has been under review for more than 10 years by the National Highway Traffic Safety Administration. Tesla Inc. and the Alliance of Automobile Manufacturers petitioned the agency five years ago to make a decision.

Now NHTSA is launching a formal, 60-day comment period for industry experts and the general public, Bloomberg News reports. Carmakers say using cameras would make their vehicles more aerodynamic and thus more energy efficient. They say such devices, just coming into use in Europe, also can provide wider and less obstructed views than mirrors do.

An NHTSA analysis in 2017 declared camera systems “generally usable,” noting that they outperform mirrors in low-light conditions, according to Bloomberg. But the agency cautioned that camera lenses can be obscured by raindrops or snow. It also complained that image displays can sometimes be distorted or distractingly bright.