Vehicle safety standards are designed mainly to protect the driver. U.S. regulators just tiptoed a step closer to rules for vehicles that drive themselves.

Developers of robotic cars have been hounding the National Highway Traffic Safety Administration for years about dialing back standards that demand equipment such as steering wheels, brake pedals and rearview mirrors—even in automated delivery vehicles that aren’t designed or configured to transport people anyway.

GM has been waiting for two years on a ruling about its request to use public roads to test autonomous vehicles that are built without a steering wheel or foot pedals. Nothing so far.

Yesterday NHTSA proposed for the first time to “modernize” 11 of its regulations to accommodate vehicles designed specifically for automated driving. Actually changing the regulations awaits the collection of public comments and subsequent review. Still, it’s a step forward.

The proposed updates would apply only to autonomous vehicles. NHTSA emphasizes that it has no plan to loosen safety standards for traditional vehicles built to be piloted, even if only occasionally, by humans.

Already on the Road

Last month the agency moved cautiously in this direction when it agreed to allow startup Nuro to deploy as many as 5,000 of its R2 delivery pods in Houston. The toaster-shaped electric shuttles have no steering wheel or rearview mirrors. 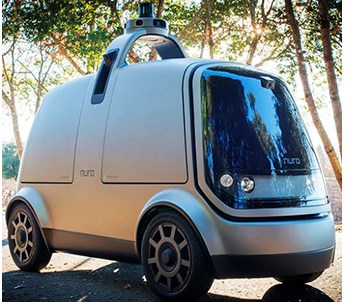 Nuro will use the vehicles to deliver groceries and prepared food. The R2s are limited to traveling no faster than 25 mph, sticking to secondary streets and operating only in specified neighborhoods. Even then, the vehicles will be constantly monitored remotely by human overseers.

As you might expect, NHTSA proposal is being heralded by the Alliance for Automotive Innovation as “great news for roadway safety.”

The Center for Auto Safety sees it differently, though The consumer watchdog agency warns that it’s a bad idea to remove safeguards for emerging technologies that even federal safety experts admit “has not been proven and may in fact be unsafe.”

Both views have merit. But the issue won’t be resolved until vehicles designed to be truly driverless get a chance to develop and show us what they can do.