NHTSA plans to compare how drivers handle lane-changing maneuvers with traditional mirrors or cameras. Carmakers petitioned NHTSA five years ago to allow cameras instead of traditional inside and outside mirrors. 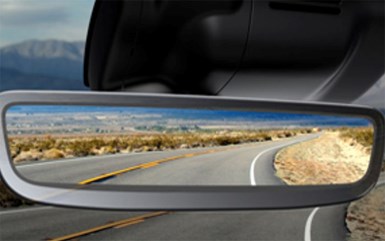 The technology, which is available in lieu of outside mirrors on several models sold in Europe and Japan, provides drivers with an unobstructed rearward view, even under dim light conditions. Manufacturers point out that replacing outside rearview mirrors with tiny camera lenses improves aerodynamics and contributes to better fuel economy.

In the case of a vehicle’s inside rearview mirror, the traditional mirror would be replaced by a video screen. The image displayed on the screen would come from a camera mounted in the rear of the vehicle, where its view would not be blocked by bodywork.

Several suppliers already offer camera-based rearview systems. Magna International’s ClearView inside mirror (pictured) can switch between traditional mirroring and video display. Gentex Corp. offers a version of its auto-dimming rearview mirror with an integrated video display that turns on when the vehicle is shifted into reverse.