Nissan CEO Saikawa to Step Down Next Week

The company’s board expects to name a permanent successor to Saikawa (pictured) by the end of October. A nominating committee has compiled a list of 10 CEO candidates from inside and outside the company. 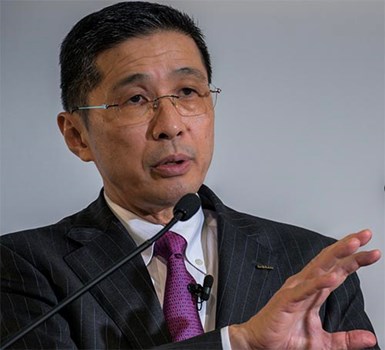 Evidence of the latter issue arose last week when internal investigators announced that Ghosn, Saikawa and other senior executives received excess compensation linked to an incentive scheme tied to Nissan’s stock price. The payouts aren’t illegal. But Saikawa concedes the plan was “different to what it should have been.”

Relations also have been tested by the French government’s refusal to consider any change in the equity arrangement between Nissan and 20-year alliance partner Renault SA. The French state owns 15% of Renault, which owns 43% of Nissan. Nissan holds a 15% nonvoting stake in Renault and a controlling stake in Mitsubishi Motors Corp., which joined the alliance two years ago.

Nissan wants a better equity balance among the partnership members. Earlier this month the French government finally signaled a willingness to discuss a change, but only if the result strengthens the alliance.

A new CEO at Nissan, combined with a review of the partnership ownership structure, also could revive merger talks between Renault and Fiat Chrysler Automobiles NV. FCA withdrew its bid less than two weeks after making it in late May, complaining that the French government was interfering in the deal.