Nissan has developed a new all-wheel-drive system that the company says will significantly enhance the performance of future electric vehicles. And by performance, it means handling like a premium sports car. 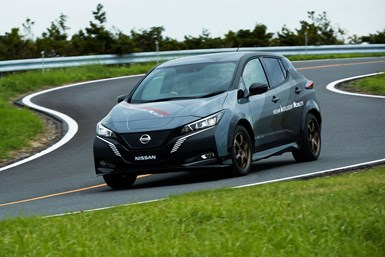 Dubbed e-4ORCE (with the 4 serving double duty, as in “force” and for 4-wheel torque distribution), the system features two electric motors—one at each axle.

Such designs aren’t new. In fact, twin motors are getting to be somewhat commonplace. This is for two reasons: AWD and increased power. The GT performance variant of the upcoming Mustang Mach-E electric crossover, for example, kicks out 459 hp and 612 lb-ft of torque.

How is e-4ORCE Different?

Instead of all-out power, Nissan’s main goal is to minimize vehicle pitch and dive. This is achieved by applying regenerative braking from both the front and rear motors and quickly adjusting power output between them as needed to keep a vehicle on its intended path.

During the development process, Nissan used its Patrol SUV and GT-R supercar as benchmarks. It teamed elements of the former’s “intelligent 4x4” system with the latter’s ATTESA E-TS torque split technology, then optimized the integrated system for EVs.

When Will it Hit the Street?

The first commercial application is expected in about two years—possibly in a production version of this year’s Ariya Concept EV.

Nissan demonstrated the technology this week at CES in a modified Leaf. For a sneak peek, you also can check out a video about the Ariya.