Nissan Looks to the Future with Ariya EV

Nissan has a lot riding on its upcoming Ariya electric crossover vehicle.

Due next year, the 2022 model is said to embody the company’s vision with a new design, updated logo and several next-generation technologies.

"For Nissan, the Ariya is not just another new model,” asserts CEO Makoto Uchida. “It is a model that opens a new chapter in the history as we begin our journey of transformation in our business, in our products and in our culture.”

Nissan took the wraps off the vehicle during an online presentation on Wednesday. 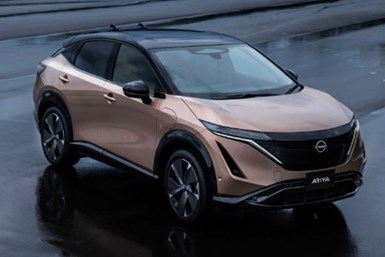 Nissan says the design represents "timeless Japanese futurism." Styling cues include a shield-shaped closed grille, coupe-like profile, steeply shaped C-pillars and uninterrupted character lines on either side of the car that connect the front fascia to the rear.

Nissan’s revised logo, which adorns the grille, is a minimalistic reinterpretation of today's stylized sun badge. In markets that allow it, the logo will be backlit with 20 LEDs.

Built on Renault-Nissan-Mitsubishi’s new CMF-EV electric architecture, the Ariya is 181 inches long, 73 inches wide and 65 inches tall. This makes it about the same size as Volkswagen’s new ID.4 electric crossover.

The purpose-built skateboard-type EV platform allows for a flat floor and houses the battery at the base of the chassis. Nissan says the Ariya’s “lounge-like” interior will be the most spacious in its class, in part because the HVAC system is packaged under the hood. 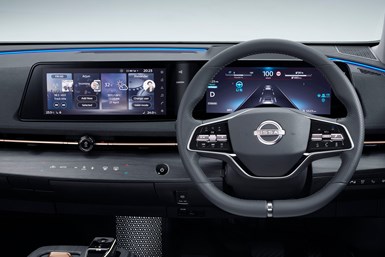 The Ariya will be available with one or two electric motors and a choice between two batteries.

The base model teams a single motor mounted on the front axle with a 65-kWh battery. The combination generates 214 hp, 221 lb-ft of torque and an estimated range of 280 miles on the Japanese driving cycle. The optional 90-kWh battery allows the car to travel 380 miles between charges.

The all-wheel-drive, dual-motor configuration with the higher capacity battery kicks out 389 hp and 442 lb-ft of torque. Range is listed at 360 miles. Nissan says the vehicle can scoot from zero to 62 mph in 5.1 seconds and has a top speed of 124 mph.

The Ariya’s twin-motor powertrain features Nissan’s new e-4orce technology. Applying regenerative braking from both the front and rear motors and quickly adjusting power output between them, the system provides more precise handling and stability with minimal pitch and dive.

Other available goodies include Nissan’s e-Pedal system (which allows drivers to control vehicle speed and braking with a single foot pedal), over-the-air software updates and ProPilot Remote Park. The latter system, which initially will only be available in Japan, allows users to initiate autonomous parking maneuvers from as far as 20 ft away.

The Ariya is the first of 12 new models that Nissan plans to introduce through the end of 2022 as the company overhauls its lineup.

Many of the new models will be EVs and hybrids. Nissan aims to sell 1 million such vehicles per year by 2024 and equip 1.5 million vehicles with autonomous driving systems by that time.

Nissan will introduce the Ariya in Japan next summer, with U.S. sales due to follow shortly thereafter. Pricing in Japan will start at about 5 million yen ($46,800).