In February, Nissan unveiled the 2020 Frontier midsize pickup with plans to launch the updated model this spring. That was before the rapid spread of the coronavirus across the U.S. stopped virtually all non-essential production, including that of carmakers and suppliers. 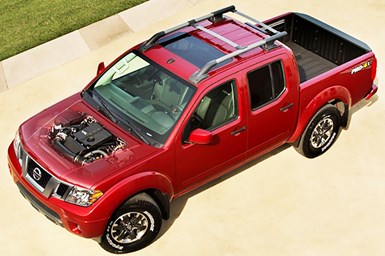 As a result, Nissan has suspended output at its U.S. plants through April 27. But company officials told reporters today that it still planned to roll out the updated Frontier sometime this spring, which technically gives it until June 19 to meet the deadline.

Nissan builds the Frontier at its Canton, Miss., plant. The truck’s new 3.8-liter V-6 engine is assembled in Decherd, Tenn.

The new 3.8-liter mill replaces the current model’s 4.0-liter V-6. Some 93% of the downsized engine’s parts are new or redesigned, although it still is considered to be part of the carmaker’s venerable VQ family.

Nissan puts the new parts to good use, bumping output 19% to 310 hp. Fuel efficiency also is said to be significantly improved over the current 4.0-liter, which is rated at 17-19 mpg (depending on configuration).

The base 2.5-liter 4-cylinder engine in the 2019 Frontier will no longer be offered.

The 2020 model also will get a new 9-speed automatic transmission, which replaces a 5-speed automatic. Borrowed from the fullsize Titan pickup, the 9-speed gets revised gearing and tuning for the Frontier. Meanwhile, the currently available 5- and 6-speed manual gearboxes will be discontinued.

In addition to the spring rollout of the updated 2020 model, Nissan says the all-new 2021 model still is on track too. Road-testing of prototypes is expected to begin soon, with a formal unveiling due by year-end.

The redesigned pickup is long overdue. The current second-generation architecture was introduced as a 2005 model.

Nissan says the 2021 truck will be lighter and more aerodynamic. Some parts will be carried over, including the new V-6 engine. But Nissan vows that the powertrain’s fuel efficiency will be improved.