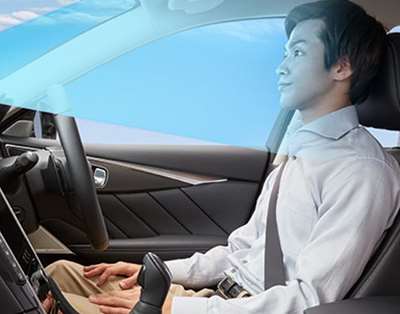 Nissan Motor Co. will launch an updated version of its ProPilot semi-autonomous driving technology this autumn in the Japanese-market Skyline sedan.

Introduced in 2016, the first-generation ProPilot allowed for autonomous braking, steering and acceleration within a highway lane at speeds as high as 100 kph (62 mph). The new ProPilot 2.0 system adds passing capabilities, which drivers can initiate by using the car’s turn signal.

In addition, the system will prompt drivers to pass when approaching a slower vehicle with an open adjacent lane. Drivers can confirm the maneuver by placing their hands on the steering wheel.

As with the first-generation system, ProPilot 2.0 works only on divided highways without sharp curves. Drivers are alerted to take control when approaching a tunnel and prior to planned exits.

The system (illustrated above) uses a combination of cameras, radar and ultrasonic sensors. But unlike most other carmakers, Nissan has no plans to use lidar for fully autonomous systems due in 2022. That’s because current lidar systems are too costly and don’t provide significant capabilities beyond those of other sensors, says Tetsuya Iijima, general manager of advanced technology development for automated driving.

Tesla Inc. also has opted against lidar. CEO Elon Musk has long opposed the technology, dismissing it as “expensive, ugly and unnecessary.” Last month, he panned lidar as a “fool’s errand.”

Initial lidar devices cost as much as $80,000. Prices have since dropped below $10,000. New solid-state system are expected to shrink the cost to about $200 for mass-produced units.

Reuters estimates that investors have injected more than $1 billion into some 50 lidar startup companies over the last three years.