Nissan Motor Co. says it will give U.S. buyers of its Leaf electric car $250 worth of credits to use at EVgo Services LLC charging stations.
#Nissan #EVgo

Nissan Motor Corp. says it will give buyers of its Leaf electric car $250 worth of credits to use at EVgo Services LLC charging stations in the U.S.

The credits apply to people who have bought or leased a new Leaf or Leaf Plus since Nov. 1. It’s not clear how long the program will last. 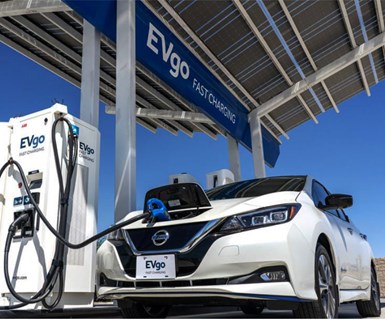 Leaf owners can use the prepaid credits at EVgo’s network of 750 public charging stations across the U.S. The stations include more than 1,200 100-kW fast-charging units, which are compatible with both CCS and CHAdeMo connectors.

In August, Nissan and EVgo announced plans to jointly invest in 200 new fast-chargers. Leaf owners also will be able to use the credits at charging stations operated by several other companies under interoperability agreements EVgo signed earlier this year.

Nissan says it has installed more than 2,000 quick-charge connectors in the U.S. since 2010. During that time, the company has delivered 130,000 Leafs in the country and another 300,000 elsewhere in the world.