Off-Road Chevy Silverado in the Works? 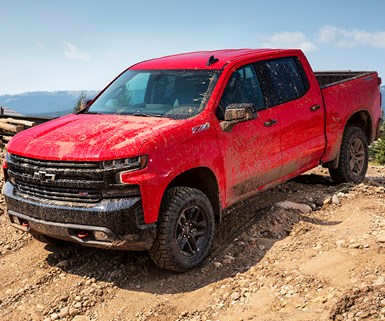 The 2022 model, to be called the Silverado ZRX, will slot into the Chevy truck lineup above the current Silverado Trail Boss (pictured), according to the report. GM Authority says Chevy filed to trademark the ZRX name last month in the U.S. and Canada.

The Silverado ZRX reportedly will get electronic locking differentials and an upgraded off-road suspension with MultiMac DSSV dampers. The truck’s bumpers also will be redesigned to improve departure and approach angles.

The off-roader likely will use the same 6.2-liter V-8 engine offered in the range-topping variant of the current Silverado. Mated with a 10-speed automatic transmission, the engine generates 420 hp and 460 lb-ft of torque. A version of the Silverado’s 3.0-liter Duramax inline-six diesel engine also could make its way into the ZRX, GM Authority notes.

Chevy already offers an off-road version of its Colorado midsize pickup called the ZR2. GM previously offered a ZRX package for the GMC Sonoma pickup, but that setup was more of a street-style body kit than an off-road system.