Selling electric vehicles (especially those not wearing a Tesla badge) has been challenging across the U.S., with nationwide adoption rates still in the low-single-digit range. 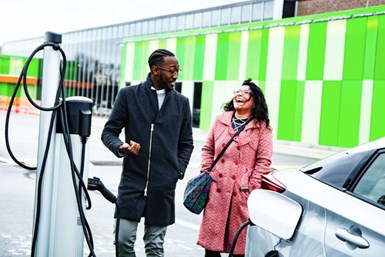 Convincing buyers in the Midwest has been next to impossible. There typically are no state or local incentives, consumer awareness is low and there’s a lack of supply—OEMs provide vehicles to dealers in areas where they have the best chance to move them.

But city planners in Columbus, Ohio, could see a greener future. As part of winning the 2016 Smart City Challenge backed by the U.S. Dept. of Transportation, Columbus set an aggressive goal to increase vehicle electrification in the area.

Over the last three years, more than 3,300 such vehicles have been sold in the region to help Columbus slightly exceed its target.

In addition to EV sales growth, a survey of Columbus consumers classified as early adopters shows consumer likelihood to purchase an EV has increased by more than 20%.

To help drive EV sales, Columbus launched a variety of initiatives to increase awareness and interest. These include:

Smart Columbus also partnered with 70 large employers in the area to develop education and incentive programs that encouraged residents drive EVs. Several companies offered matching incentives of as much $2,000 to purchase an EV.

In addition, 44 work sites have installed 248 EV charging ports in the Columbus region.

The program was designed to reduce greenhouse gas emissions through EVs and decarbonization.

To this end, Columbus estimates the new EVs will eliminate about 1,850 metric tons of carbon dioxide emissions, which the city says is equivalent to planting more than 30,000 trees to sequester carbon during a 10-year period.