Paint room automation has come a long way since the 1980s, when early robots at a General Motors facility infamously were caught spraying each other rather than vehicles. 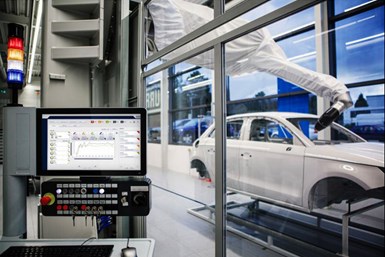 Now it’s time to take the technology to the next level: artificial intelligence.

Durr claims the system, which builds on the company’s existing DXQanalyze, is the first AI-based application for vehicle paint shops.

Durr says the system can process huge amounts of data and recognize complex correlations with a high degree of accuracy at the machine, vehicle, plant or process level.

Trend analysis enables more precise defect identification and helps pinpoint what’s causing the problem, according to Durr. AI allows algorithms to be adapted on the fly to reflect changing conditions.

At the process level, Durr says, the system can simulate the heat-up curve in an oven to better identify anomalies. Manufacturers previously had to rely on data from sensors during periodic measurements.

But machine wear can cause fluctuating ambient conditions, including changing air flow, that the company says can significantly affect the surface quality of a car body as it is painted. The AI system predicts how performance will change as the oven ages in between measurements, then automatically makes adjustments accordingly.

In addition, the machine learning system is designed to recognize aging trends of various components and calculate the optimum replacement time.

For example, high-frequency robot data is used to detect wear indicators and patterns for paint mixers. This enables predictive maintenance and repair schedules, and continually calculates the remaining service life of a mixer.

At the factory level, analytics software is used to increase overall equipment effectiveness.

AI tracks recurring quality defects in model types, specific colors and individual body parts to determine which step in the production process is responsible for a deviation. Durr says this can allow for faster corrective actions to improve first-run rate quality.

Durr has collaborated with several carmakers to test the system under real-world conditions.

Initial tests indicate the system has resulted in improved quality of painted parts and reduced downtime, according to Durr. And there haven’t been any reports of self-painting robots.