Let’s be honest: Spending $3 million on a car—or virtually anything other than a cure for cancer or feeding the homeless—is absurd.

But if you have the means and desire (and some people obviously do), you don’t want to scrimp on the paint job—or lack thereof. 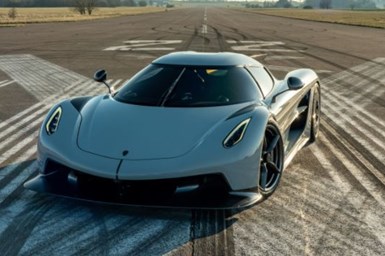 That’s the thinking behind some of the options on Koenigsegg’s upcoming Jesko hypercar. Buyers can up the exclusivity of the car with an exposed black carbon fiber finish for a mere $443,000.

That’s right, nearly half a mill for choosing not to have the car painted.

To put this in perspective, you could get a Lamborghini Aventador S or a stripped-down Rolls-Royce Phantom for about the same amount of money. That’s for the entire cars, not just the carbon finish.

Or you could buy a Bentley Bentayga, plus a Porsche Taycan and a loaded Corvette C8.

Koenigsegg is allowing qualified buyers to configure the Jesko online. One of the handful selected by the company (production will be limited to 125 units) is real estate mogul and car collector extraordinaire Manny Khoshbin, who shared his choices on YouTube.

For those who don’t want to splurge on the naked carbon exterior, there are several relatively more modest choices. These include carbon fiber tints in green, blue, red or purple at $346,000 each, or more traditional paint jobs (Apple Red and Sweet Mandarin) at $63,300, pearl paints for $25,000 or metallic finishes for $14,000. There also are a few solid exterior colors available for no additional cost.

Buyers also have plenty of other options to choose from, including:

Khoshbin’s initial specifications for the Jesko add up to $3.4 million. He also configured a souped-up Jesko Absolut at nearly $4.1 million.

The Absolut promises to be the fastest car in the world. That honor currently belongs to the Bugatti Chiron Super Sport+, which hit 304 mph during tests last year.