Pass the Steering Wheel, It's My Turn to Drive

Most automotive patents never make it into production.

But some of those that don’t make the cut can be the most intriguing… or at least entertaining. A possible case in point: a new Volvo patent that describes a vehicle with multiple driving positions.

In the patent, which was filed in early 2019 and granted last month, Volvo details plans for a reconfigurable interior that would allow front passengers to drive when seated in either the right or left side of the vehicle.

The system features a steering wheel mounted on a rail, which allows it to slide from one side of the dashboard to the other. It also could be positioned in the center of the vehicle, presumably for cars with bench seats. 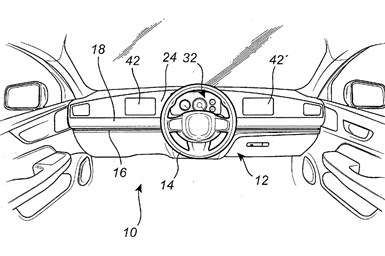 The brake and accelerator could be either conventional foot pedals or sensor pads on the floor. Either way, there would be two sets of controls—one for each seating position—with the appropriate one activated based on where the steering wheel is located, according to the patent.

There also are two options for the instrument cluster. One is a full-length digital display that can be reconfigured as needed.

The other is to mount a small display screen on the steering column that moves with the steering wheel. Stalk-based and other driver controls, such as light switches, also would slide from side to side.

Whatever the setup, it would require the use of steer-, brake- and throttle-by-wire systems.

A reconfigurable driver’s position would enable a vehicle to be more easily adapted for international markets, including both right- and left-hand-drive configurations, without major modifications.

There also are potential benefits for semi-autonomous vehicles. When operating in autonomous mode, drivers could simply slide the steering wheel and other controls to the side to create more room for other activities.

The design also could help otherwise out-of-position occupants who changed seats during a trip to quickly re-take control of a vehicle if needed. Or it could be used to quickly change drivers if one becomes too tired or simply wants a break during a long trip.

Proponents claim such a system would be a cheaper alternative than using a retractable steering wheel.

Even if Volvo determines there is a market for such a system and overcomes any manufacturing challenges, changes in current regulations likely would be needed.

For now, it’s just an interesting concept. But it does show how transportation could be reimagined sometime in the future.