Automobili Pininfarina will show the production version of the upcoming Battista electric supercar at this month’s Monterey Car Week in California. 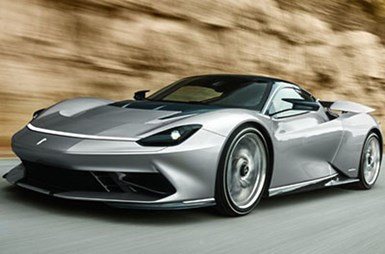 The carmaker, which was founded last year by Mahindra & Mahindra Ltd.’s Pininfarina unit, unveiled new images of the EV. A more contoured hood and redesigned side mirrors enhance the car’s aerodynamics.

Built around a carbon-fiber monocoque, the Battista will be powered by four electric motors that generate a combined 1,900 hp and nearly 1,700 lb-ft of torque. Pininfarina estimates the car will be able to sprint from zero to 62 mph in less than two seconds and be capable of driving 300 miles between charges.

Production is due to start in late 2020 and will be limited to 150 units, with 50 each allocated for Asia, Europe and the U.S. The car will have a base price of about $2.3 million.