Only five of the special-edition models will be produced. The hand-crafted painting process alone takes weeks to complete.
#tech #AutomobiliPininfarina #Mahindra

The launch of a carmaker’s first vehicle doesn’t usually coincide with the brand’s 90th anniversary. 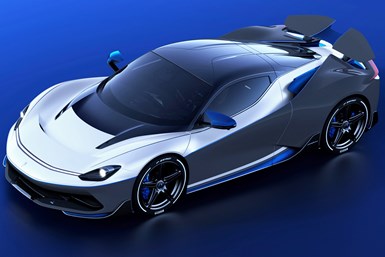 But that’s exactly the position Pininfarina finds itself in as it prepares to introduce the all-electric Battista hypercar later this year.

While the company’s origins date back to 1930 when the legendary Italian design house started as a coachbuilder for other carmakers, its Automobili Pininfarina offshoot (under parent Mahindra & Mahindra) didn’t take shape until 2018, with a goal of producing the first Pininfarina-badged model.

To celebrate the milestone, Pininfarina is preparing a special anniversary edition of the already ultra-exclusive Battista. That vehicle, named after Pininfarina’s founder, will be limited to about 145 units with pricing starting at $2.3 million.

The so-called Battista Anniversario, if you can believe it, ups the ante—to nearly $2.9 million. Just five of the anniversary cars are planned.

One of the most distinctive features of the Anniversario model is its two-tone paint scheme.

It takes several weeks for artisans at Pininfarina’s design studio in Cambiano, Italy, to hand-paint the cars, blending a combination of heritage-inspired hues (Bianco Sestriere, Grigio Antonelliano and Pininfarina’s signature Iconica Blu). During the process, the body is taken apart and reassembled three times for pinstriping to be applied directly onto the body, according to the carmaker.

Design chief Luca Borgogno likens the attention to detail to that of a classic masterpiece. "Battista Anniversario features one of the most complex paint finishes in the world. The process of creating such a finish is akin to a great artist completing an Old Master painting."

There was no need to increase the output of the base Battista, which generates 1,900 hp and nearly 1,700 lb-ft of torque from its four electric motors. The car sprints from zero to 62 mph in less than two seconds and can top 186 mph (300 kph) in 12 seconds on its way to a top speed of 217 mph. 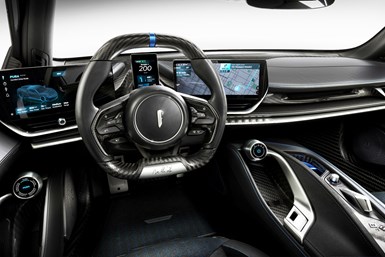 But the Anniversario does get some performance upgrades. Topping the list is a new “Furiosa” aerodynamic package with a revised carbon fiber front splitter, side blades and a wider air diffuser. Designed to enhance cornering capability by boosting downforce, the package will be an option on the base Battista. 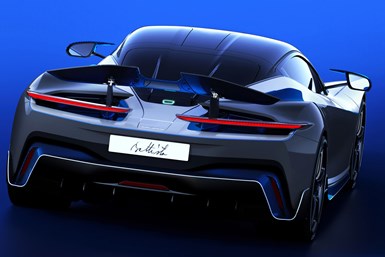 To further enhance handling, the anniversary model also gets larger Pirelli P-Zero tires and a 22-lb reduction in unsprung mass. The latter is achieved via center-locking forged aluminum wheels.

Other anniversary extras include a host of special badging and blue accents—throughout the exterior and interior—upgraded seats finished in Alcantara and what’s described as “sustainably crafted” black leather.

Pininfarina also is moving forward with its second model, a crossover that’s due to be unveiled as the Pura Vision design study in August.

Measuring nearly 200 inches long, the vehicle will feature a muscular stance, fastback rear and rear-hinged rear doors. Pricing is expected to start at about $250,000.

The crossover will be built on a new skateboard platform that is intended to carry several other models, including a coupe, convertible and sedan. Pininfarina is partnering with Bosch and Benteler on the modular architecture.